The promotional blitz surrounding Paramount's Transformers: Age of Extinction hit retail Sept. 30, with exclusives tied to the Blu-ray release at all the major retailers.

Amazon.com bundled the Blu-ray combo pack (non-3D edition) with a statue of Optimus Prime riding the Dinobot Grimlock, priced at $79.99.

Target offered the Blu-ray combo pack in limited-edition packaging that transforms into a facsimile of Optimus Prime. Some Targets still had a preorder bundle for Age of Extinction that included a 40-inch cloth poster and a voucher for the robot packaging Blu-ray. Target also offered a $10 savings with the purchase of the Blu-ray concurrently with a select "Transformers" toy, and its Age of Extinction Blu-rays touted $6 coupons for future purchases of Paramount movies on DVD or Blu-ray.

Walmart offered a number of exclusives tied to Age of Extinction. One was an online exclusive Blu-ray combo pack in packaging designed to resemble Bumblebee’s head, offered at Walmart.com for $24.96. In addition, Walmart offered a preorder incentive that let fans order the head on its own or with a deluxe Transformers action figure in a $44.92 bundle, a savings of $15.

For its physical stores, Walmart had a deluxe boxed set of the Blu-ray combo pack with a metal magnet and three exclusive figurines. In addition, Walmart offered a boxed set of all four "Transformers" films for $39.96.

Best Buy offered Age of Extinction in exclusive steelbook packaging. Best Buy also had exclusive cover art for Fox's 24: Live Another Day, in the form of a o-card sleeve.

Toys "R" Us also had an Age of Extinction exclusive, packaging the Blu-ray with Optimus Prime and Galvatron Kre-O figures for $29.99.

Target offered Gone With the Wind in Diamond Luxe-style packaging, at $18.99.

Walmart had exclusive availability of Shout! Factory's animated Thunder and the House of Magic on DVD and Blu-ray, as well as CBS's Walker Texas Ranger: The Reunion. For Universal's Team Hot Wheels: The Origin of Awesome, Walmart offered the DVD with a pack-on toy car for $14.96. For Universal's Monster High: Freaky Fusion, Walmart offered the DVD packed with a flashlight pen for $14.96.

Target ran a Monster High: Freaky Fusion cross-promotion offering $5 off when the DVD or Blu-ray was purchased with a tie-in doll.

Universal's hit comedy Neighbors was the only major theatrical film arriving on disc Sept. 23, but that didn't stop retailers from attaching their own exclusive promotions to the title to lure consumers to their party.

Walmart offered a deluxe box of the Neighbors Blu-ray combo pack with a frat T-shirt. Target offered the Blu-ray with a bonus disc containing 30 minutes of exclusive bonus content. And Best Buy offered free mini red beer cups for free (available for $4.99 separately) with the title.

Target also offers a $5 gift card with a Target.com preorder or Transformers: Age of Extinction, X-Men: Days of Future Past, Maleficent or Teenage Mutant Ninja Turtles. 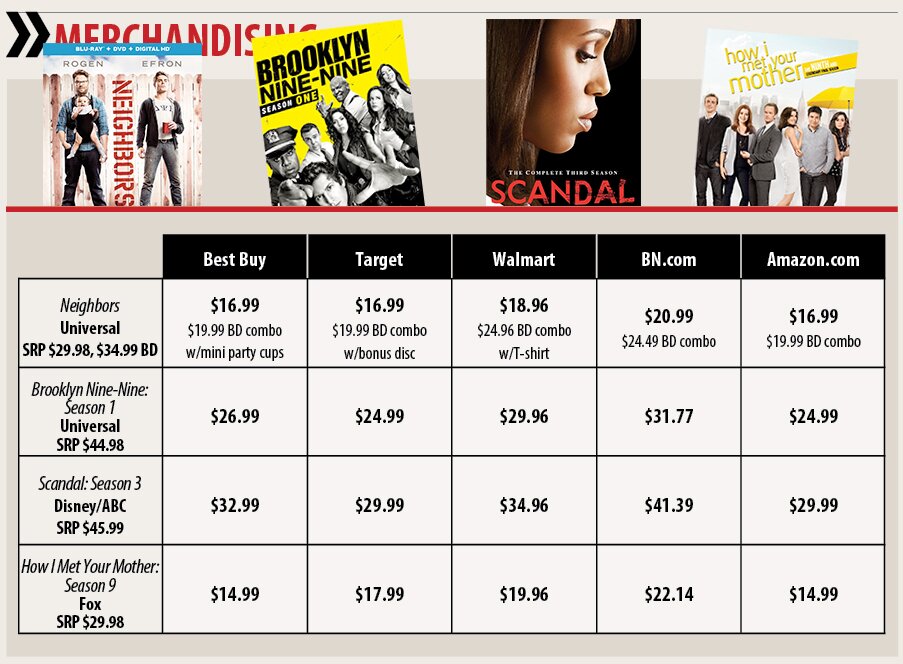 Warner's disc release of the new Godzilla remake burst onto retail Sept. 16 with promotional exclusives at most of the major retailers.

Walmart offered a special single-disc Godzilla DVD, as opposed to the two-DVD special edition DVD available everywhere else. The $14.96 Walmart DVD offered only a couple of the bonus featurettes from the array of extras found on the other disc versions.

Target presented the Godzilla Blu-ray with the exclusive 30-minute featurette Godzilla: Rebirth of an Icon.

Target also had exclusive content with Fox's Sleepy Hollow: Season One, as well as a digibook of artwork based on the show.

Other extras at Walmart included the exclusive titles The Perfect Wave on DVD ($12.96) or Blu-ray ($17.96) from Anchor Bay, and Lionsgate's animated Jungle Master ($12.96). For The Fault in Our Stars, Walmart offered two bonus song downloads, and for Sony Pictures' Think Like a Man Too, Walmart offered the DVD packed wih the first film for $19.96. In addition, Walmart offered the Barbie and the Secret Door DVD packed wih a Sing-along With Barbie DVD ($14.96). Walmart also had a $14.96 two-pack of Thomas & Friends: Tale of the Brave — The Movie available through Vudu with the five-episode Thomas & Friends: Engines to the Rescue DVD.

Best Buy had a special lenticular cover for the Blu-ray of the seventh season of "The Big Bang Theory."

Apple's iTunes offered the movie with an exclusive four-minute featurette about the film's elevator fight. This is available not only to people who buy the film at iTunes, but also those who redeem their Disney Movies Anywhere digital copy code included with the disc.

Target promoted an exclusive six-minute behind-the-scenes featurette with the 3D Blu-ray, redeemable through its Target Ticket digital streaming service. However, the site wasn’t configured to redeem the digital copy code for the version of the film with the extras, leaving many consumers frustrated and complaining on message boards that the content they wanted wasn’t available on the release date (Sept. 9). TargetTicket.com did credit some accounts that already burned the code on the non-extras version to let them directly buy the correct version of the digital copy containing the exclusive featurette, or added the extras to those who already redeemed the code. The redemption problems were resolved by the next day when Target made the extras version the only one available at TargetTicket.com.

Target also offered exclusive bonus content with discs of the fifth season of “The Vampire Diaries” and the first season of Sony Pictures’ “The Goldbergs.”

Target has also been promoting Target Ticket with stickers on select Blu-ray and DVD packages offering a $5 credit with a new digital purchase at the site.

Walmart had the biggest exclusives, offering at least four different versions of the title on shelves. All of them came with a bonus Songs of Survival Vol. 2 CD.

In addition to standard DVD and Blu-ray editions, Walmart offered special DVD and Blu-ray boxed sets of the show containing a collectible prison key. This is a variation of the exclusive that was sold as a preorder from the Anchor Bay booth at this year's San Diego Comic-Con International.

Target offered the Blu-ray with steelbook packaging, while Best Buy offered it with lenticular cover art.

For Fox’s Sons of Anarchy: Season Six, Walmart offered the DVD and Blu-ray sets with a pack-in knit cap, while Best Buy offered access to six issues of a digital comic book based on the series.

Walmart also had exclusive availability of an animated film called The Jungle Bunch 2: The Great Treasure Quest, from Universal, offered at $9.96.

For the second week of The Amazing Spider-Man 2 Blu-ray ($24.99), Target offered an instant $10 savings when the title was purchased at the same time as a triple attack electronic Spidey action figure, priced at $15. 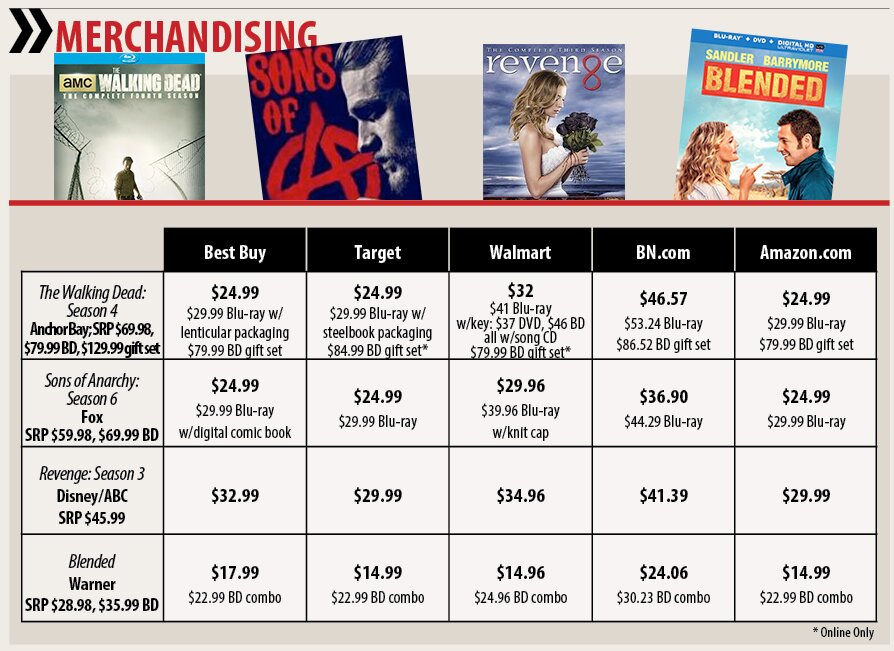 Sony Pictures Home Entertainment pulled out all the stops to promote the Blu-ray and DVD release of The Amazing Spider-Man 2 Aug. 19, with promotional exclusives available at every major retailer.

The biggest one came via Amazon.com, which offered an exclusive gift set of the 3D Blu-ray combo pack of the film with packaging in the form of a bust of the villain Electro. The set is listed at $149.99 but Amazon had it for as low as $74.99.

Target offered Blu-ray copies with a bonus disc containing the featurette "Something Sinister This Way Comes: A Look at Spider-Man’s Most Fearsome Foes.” In addition, Target’s exclusive sets had a coupon for free popcorn and soda at the Target Café.

Best Buy offered the Amazing Spider-Man 2 Blu-ray with a collectible Magno case and comic book. In addition, Best Buy offered $10 off ASM2 with the purchase of a TV title $14.99 or higher.

Walmart offered a Blu-ray two-pack of the new film with its 2012 predecessor.

The Aug. 5 release of Lionsgate's Divergent prompted the major retailers to line up their own exclusives to try to attract buyers.

Walmart offered the most substantial edition of Divergent, loading a deluxe version of the Blu-ray combo pack with a 32-page collector's book, four additional featurettes, an excerpt from the new Four book, photo spreads and more.

Other exclusives at Walmart included a $14.96 DVD of a new live-action Tarzan movie, from Lionsgate, and a DVD of Nickelodeon's Teenage Mutant Ninja Turtles: Pulverizer Power ($5).

Each of the big three major retail chains offered consumers its own exclusive promotion for the home video release of Fox's Rio 2.

Best Buy didn’t have an exclusive edition of Rio 2, but the chain did give shoppers a chance to buy a Rio 2 lunchbox for just $4.99 (regular price $9.99) with the purchase of the film on disc.

In addition, Best Buy is already taking preorders for the Blu-ray of Dawn of the Planet of the Apes, offering 100 My Best Buy bonus points.

Copies of the sci-fi thriller Under the Skin, however, were in scarce supply at Best Buy, with most stores not stocking the Lionsgate title. The Best Buy website listed the title as available at the Costa Mesa, Calif., location, but it was not seen in the ne-release section or any of the store’s other disc aisles.

For Entertainment One’s Hell on Wheels: The Complete Third Season, Target offered a set of character cards with the DVD. 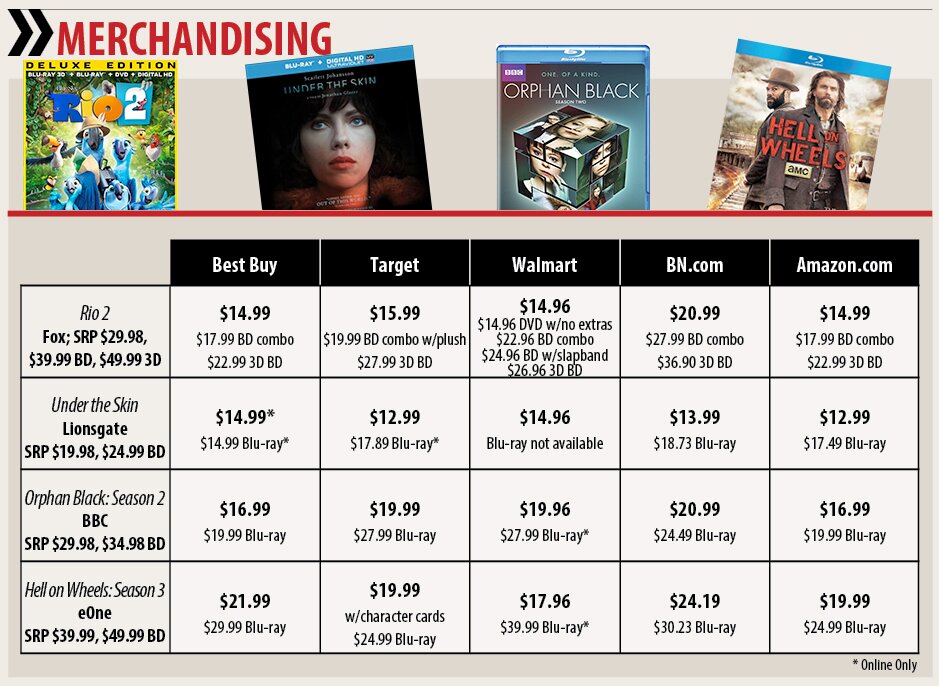 'Wings' and a 'Walker' at Walmart

Without many major new releases July 8, Walmart put less focus on the widely available new releases than it did on its own exclusive titles, of which it had several for the week.

Possibly timed to take advantage of the July 18 theatrical release of Disney’s Planes: Fire and Rescue, Walmart trotted out Lionsgate’s animated sequel Wings: Sky Force Heroes for $12.96 and a double feature DVD of both “Wings” films for $16.96.

Timed with the World Cup, Walmart exclusively offered at $14.96 Universal’s The Class of ’92, a documentary about the rise of the Manchester United soccer club due to a fresh roster of young superstar talent, including David Beckham.

Finally, Walmart had a $9.96 DVD of CBS’s Walker Texas Ranger: One Riot, One Ranger, a feature presentation of the show’s first episode, plus a Vudu digital copy. Promotional materials touted the title as the first in a series.

Best Buy offered an exclusive Blu-ray of Asylum’s Hercules Reborn, while Target had a two-DVDs-for-$8 sale. 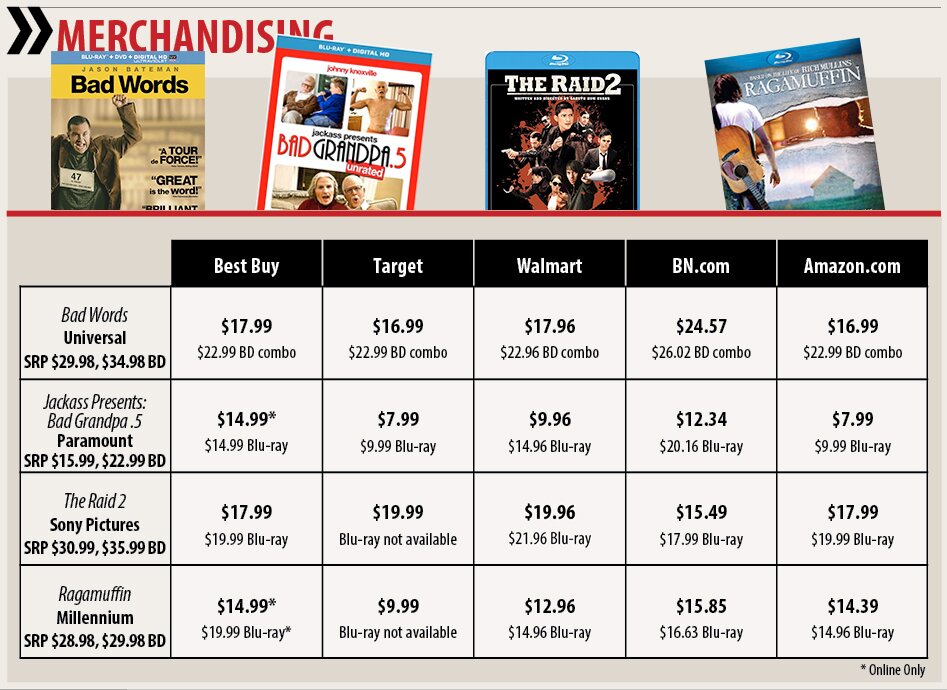 Monsters and Turtles Seize the Week

Studios steered clear of releasing any major titles in the week leading into the July 4 holiday, resulting in most of the July 1 new releases being TV DVD fare or obscure theatrical titles with low box office tallies.

The only real retail exclusives for the week came from Target, which tied promotions to a couple of kidvid titles. For Nickelodeon’s Teenage Mutant Ninja Turtles: The Good, the Bad and Casey Jones, Target gave away a free 5.5-oz box of Kraft macaroni & cheese with purchase of the DVD.

Target also offered a $5 savings with the purchase of the Monster High: Clawesome Double Feature and any “Monster High” Art Class doll. The double feature includes the animated specials Fright On! and Escape From Skull Shores.

Target also has early availability of Universal’s Necessary Roughness: Season Three and Royal Pains: Season Five for $19.99 each. The titles will be widely available Sept. 23.