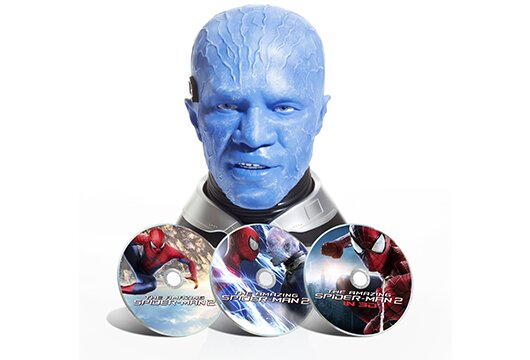 Sony Pictures Home Entertainment pulled out all the stops to promote the Blu-ray and DVD release of The Amazing Spider-Man 2 Aug. 19, with promotional exclusives available at every major retailer.

The biggest one came via Amazon.com, which offered an exclusive gift set of the 3D Blu-ray combo pack of the film with packaging in the form of a bust of the villain Electro. The set is listed at $149.99 but Amazon had it for as low as $74.99.

Target offered Blu-ray copies with a bonus disc containing the featurette "Something Sinister This Way Comes: A Look at Spider-Man’s Most Fearsome Foes.” In addition, Target’s exclusive sets had a coupon for free popcorn and soda at the Target Café.

Best Buy offered the Amazing Spider-Man 2 Blu-ray with a collectible Magno case and comic book. In addition, Best Buy offered $10 off ASM2 with the purchase of a TV title $14.99 or higher.

Walmart offered a Blu-ray two-pack of the new film with its 2012 predecessor.