The attention retailers heaped upon Despicable Me 2 prior to its July 3 theatrical release has paid off with huge box office numbers, so it’s understandable tie-ins with new theatrical releases would remain fresh on the agendas of the major chains.

Target is offering $7.50 Theater Cash coupons for several recent and upcoming movies with the purchase of select catalog DVDs and Blu-rays, chief among them a Despicable Me 2 coupon and Minion figure with the Despicable Me, Lorax, Hop or ParaNorman DVD at $8.99.

Best Buy offered $5 in instant savings with the joint purchase of two new Tyler Perry discs: his latest film Temptation and his play The Haves and the Have Nots.

With Despicable Me 2 looming in theaters, Best Buy is offering a pair of exclusive 3D glasses for fans planning to see the animated sequel.

The glasses, which are styled as Minion goggles, cost $4.99 with the purchase of select 3D and Blu-ray movies, such as the original Despicable Me, The Lorax or ParaNorman, offered at $19.99 each.

In addition, Best Buy is taking preorders for the Despicable Me 2 Blu-ray combo pack. A $14.99 deposit comes with a sneak peek of the movie on Best Buy's CinemaNow digital service and a digital copy of the film before its disc release.

When the new products aren’t exciting enough to warrant any special promotions, retailers step up their efforts to clear out inventory. This week, Best Buy touted 35% off TV DVD boxed sets at its HBO section, with shows such as “Veep” and “True Blood” offered as low as $12.99 each season.

Another big promotion that popped up at Best Buy was the chance to pick up $7.50 in Despicable Me 2 movie coupons with select Universal catalog titles, including the original Despicable Me.

Walmart began taking preorders for the eventual Despicable Me 2 Blu-ray from Universal, even though the movie doesn’t arrive in theaters until July 3. The deal includes a limited-edition Minion toy.

Stores had plenty of options for gift givers in the week before Father's Day.

Best Buy offered a slew of discounts, with steelbook Blu-rays for Warner's The Hangover, The Hangover Part II, Batman Begins and The Dark Knight at $9.99 each. Best Buy also had a buy one, get one free deal on Sony Pictures Blu-rays such as Ghostbusters, Drive, Monty Python and the Holy Grail and Zombieland, at $9.99 each.

Target offered a number of recent Blu-ray hits for sale, such as $12 for Skyfall and Taken 2.

The arrival of Fox’s A Good Day to Die Hard, the fifth entry in the “Die Hard” action franchise, attracted some decent retail attention in an otherwise crowded week.

Best Buy offered a deluxe version of the Blu-ray combo pack with an exclusive beverage opener for $2 more than the regular combo pack. Best Buy also offered a $5 savings when the new film was bought with earlier movies in the franchise on Blu-ray, offered at $9.99 each, with a set of the first four films offered at $29.99.

Walmart continued its practice of offering bare-bones versions of new movies, offering A Good Day to Die Hard as both a single-disc Blu-ray and a DVD with no extras, in addition to the configurations available everywhere else.

Walmart also had an exclusive Die Hard Legacy Collection of all five films in one Blu-ray boxed set for $39.96.

Another Fox title, the direct-to-video 12 Rounds 2: Reloaded, was the focus of a different promotion at Best Buy. This one offered a $10 coupon for pay-per-view cable purchases. 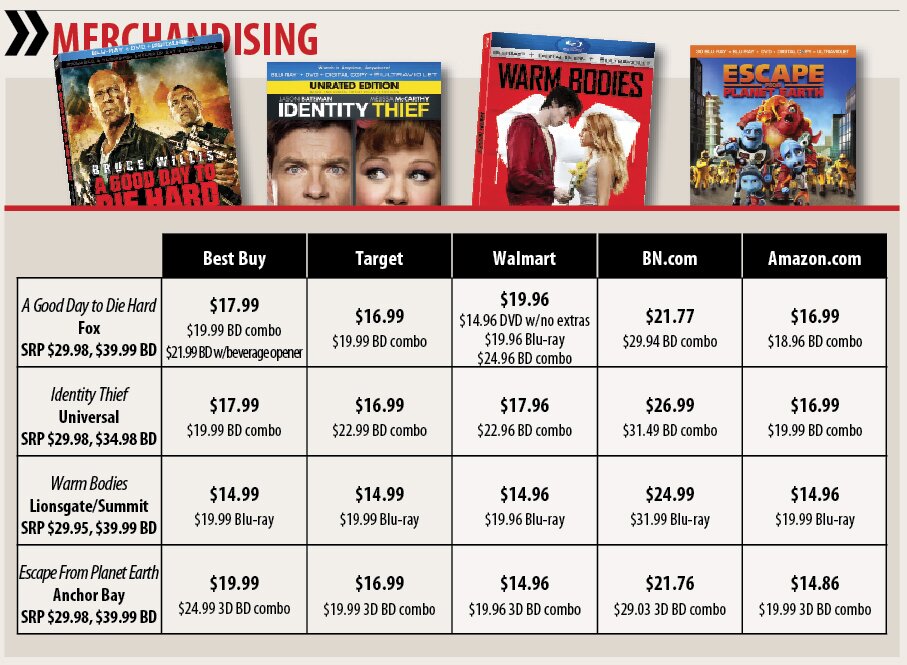 A slow week for new releases coming off the Memorial Day weekend has given stores a big excuse for promoting older titles with huge savings.

Target set up several deep-discount shelves, such as $4.75 for 1980s and ’90s hits on DVD, and $10 for more recent fare such as The Expendables 2 and The Perks of Being a Wallflower on DVD or several “Star Trek” movies on Blu-ray.

Target also offered a $10 savings when two Universal TV DVDs were bought together: the second season of “Suits” and the third season of “Covert Affairs.”

Best Buy touted a $10 discount coupon for Disney/ABC’s Red Widow DVD, bringing the first-week price down to $9.99. The coupon could be found at ABCTVonDVDCoupon.com.

In addition, Best Buy offered a free $10 gift card with the purchase of $50 or more of TV titles on DVD or Blu-ray.

Also, Walmart packed Arc Entertainment's DVD of the movie Space Warriors, which looks to be a 21st century update of Space Camp, with Return to Nim's Island for $16.96. Space Warriors is available separately for $12.96 on DVD and $14.96 on Blu-ray. 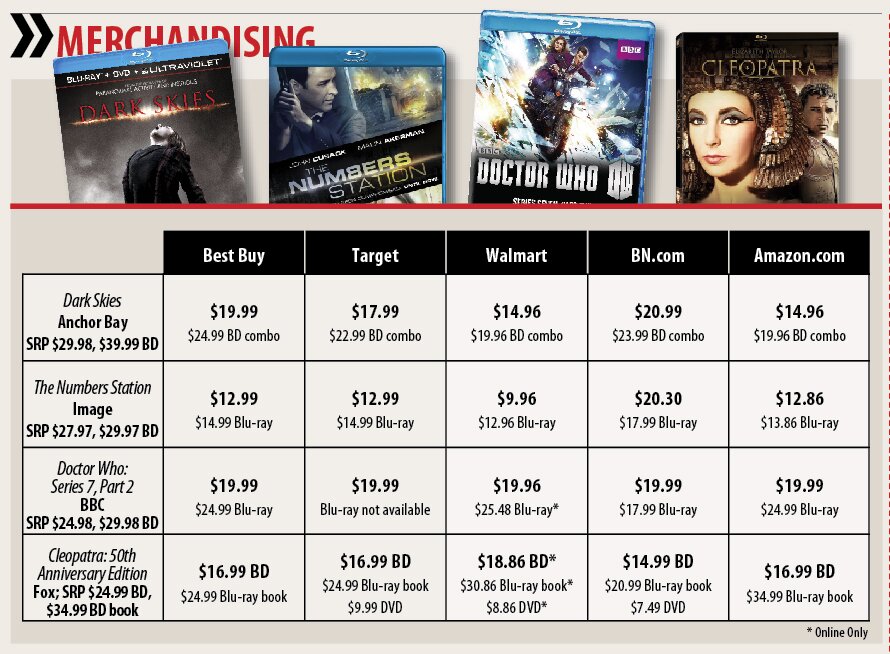 The reality of the home entertainment market has made the synergy between theatrical and home video more pronounced than ever. Iron Man 3 caused a few eyebrows to raise when several retailers began taking preorders of the DVD and Blu-ray just as the film hit theaters.

The latest blockbuster subjected to this trend is Paramount’s Star Trek Into Darkness. The same weekend the film hit theaters, Amazon began offering several configurations for preorder, including an exclusive replica-phaser gift set of the 3D Blu-ray combo listed at $99.99 (discounted to $79.99).

Best Buy devoted a significant portion of its weekly ad circular and shelf space touting preorders for Star Trek Into Darkness. Shoppers who paid the $14.99 deposit on the Blu-ray or 3D combo packs were given $8 off the cost of a ticket purchased on Fandango.com, as well as instant access to exclusive content on CinemaNow.

Best Buy also offered $8 movie coupons for The Hangover Part III and Fast & Furious 6 with the purchase of previous Blu-rays in those franchises, among other select titles.

Walmart offered exclusive availability of the family film The Lost Medallion on DVD ($12.96) and Blu-ray ($14.96) from Bridgestone. 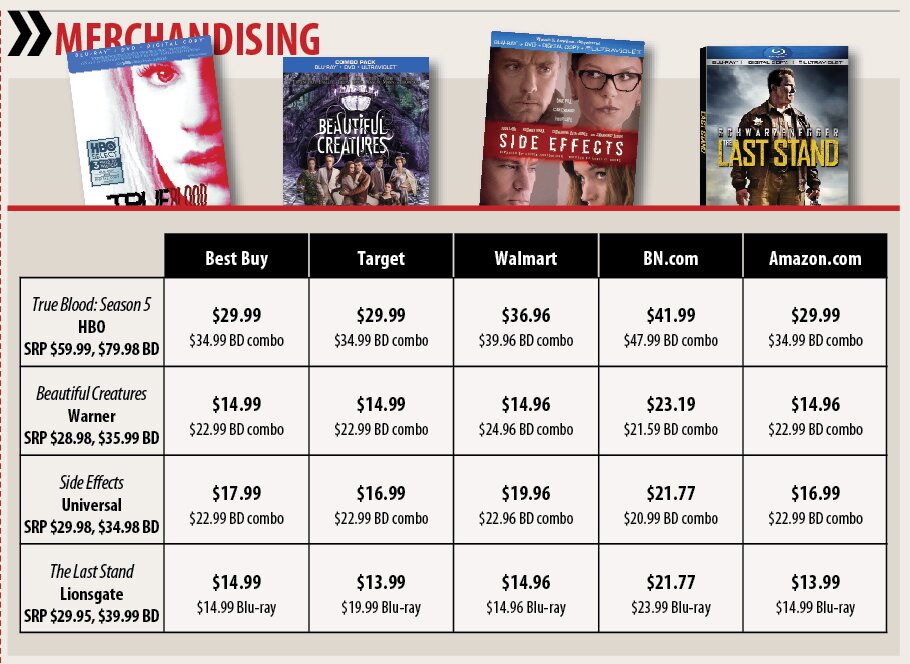 Just as Walmart has been heavily promoting preorders of upcoming DVDs and Blu-rays with a tie-in to its Vudu digital service, Best Buy has been offering similar deals through its CinemaNow streaming site.

Without much else to promote during the May 14 new-release week, Best Buy touted the June 4 Blu-ray for Fox’s A Good Day to Die Hard. Shoppers who preorder the title in stores or at BestBuy.com/DieHard can watch it early in Digital HD on CinemaNow, and get the Blu-ray combo pack when it comes out with an exclusive beverage opener.

The in-store preorders at Best Buy require a $14.99 deposit.

Taking its commitment to CinemaNow a step further, Best Buy stores have set up CinemaNow kiosks in the home video section, with CinemaNow gift cards for consumer purchase and video displays to demonstrate the service. 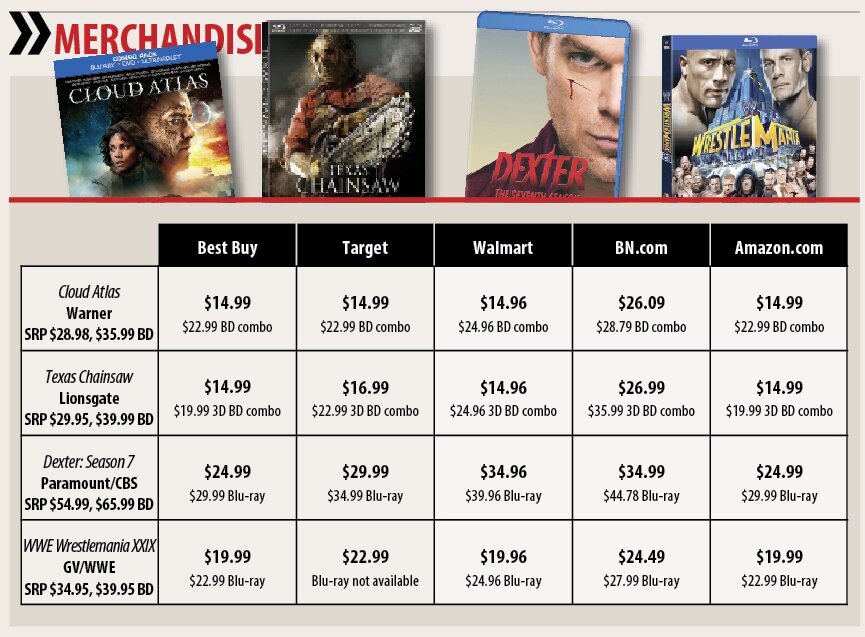 One of Walmart’s go-to exclusives of late has been to strip a new-release DVD or Blu-ray of any extras and offer it to consumers at a discount from the widely released editions. May 7 Walmart employed the strategy for both Paramount’s Jack Reacher, offering a bare-bones DVD edition (though it did include a Vudu digital copy), and Fox’s Safe Haven, offering not only a vanilla DVD but also an extras-free Blu-ray.

Target went the opposite direction for both titles. For Safe Haven, Target offered an additional 70 minutes of bonus content with the Blu-ray, and offered a $5 savings when the movie was purchased at the same time as the original novel (offered at $11.99). For Jack Reacher, Target packaged the Blu-ray with an exclusive novella of “Reacher” adventure The Second Son. Target also had all “Reacher” books for sale.

Walmart was not without its add-ons on certain titles. For Warner’s Superman Unbound, Walmart had an exclusive two-DVD special edition not yet available elsewhere (it streets June 18). And for the indie faith-based DVD release of Deep in the Heart, Walmart offered a bonus CD soundtrack. 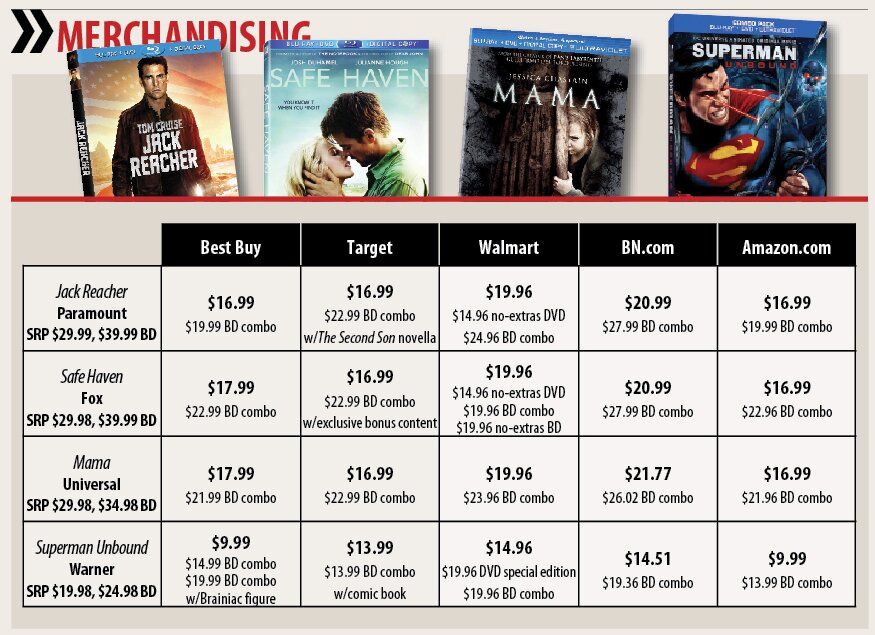 Target kicked off its big pre-Mother’s Day promotions with an exclusive edition of Paramount’s The Guilt Trip DVD and Blu-ray. The Target special edition offers the disc gift-wrapped, with an audio greeting card featuring the voice of star Barbra Streisand.

Copies of The Guilt Trip DVD at Walmart came with a special digital copy from the chain’s Vudu digital streaming service.

For Mother’s Day, Walmart set up a huge endcap display of $5 DVDs of such titles as Saturday Night Fever, Grease and Love Story, and $7.50 DVDs such as Magic Mike. Walmart also trotted out two new animated adventures exclusively on DVD at its stores: Universal’s Small Potatoes at $9.96 and Fox’s Koala Kid at $12.96.

Target offered a few discount deals on other new releases. Shoppers who bought Silver Linings Playbook on DVD or Blu-ray along with the paperback book (offered at $12) upon which the film is based could save $5. And the joint purchase of Star Trek: The Next Generation — Season Three Blu-ray ($59.99) with the Best of Both Worlds Blu-ray ($14.99) included a $10 savings.