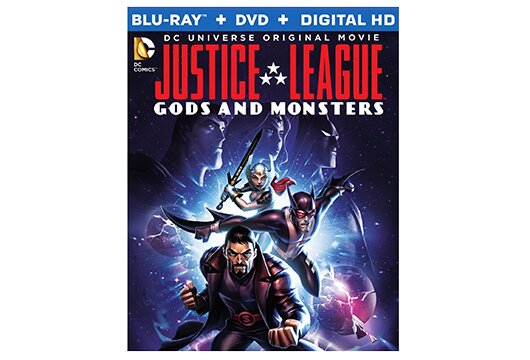 A lot of the attention given to Gods and Monsters focuses on the alternate reality aspect of the storyline. The film purports to be about Superman, Batman and Wonder Woman, yet these are versions of the iconic characters that no one in the audience is going to recognize, as far removed as they are from their traditional portrayals.

The idea of an alternate reality in fiction is not a new concept, and longtime comic book fans shouldn’t have any trouble latching on to what is going on here. Those with only a casual acquaintance with these characters (say, what they know from big-budget movies or popular cartoon shows, or the occasional parody of such) might find themselves puzzled for a while, but the film does a good job immersing itself in the world of its story that any confusion shouldn’t last long.

On the other hand, the Gods and Monsters gets a lot of mileage out of contrasting itself with the regular DC Comics universe. Superman is still from Krypton, but he is the son of the evil Zod, not the good Jor-El. Wonder Woman is not an Amazonian warrior, but an alien princess fleeing heartbreak on her homeworld. And Batman is a vampire.

Well, actually he’s a scientist with a blood disease who drinks the blood of criminals to stay alive, but close enough.

It should be no surprise that with these darker origins comes a darker version of the Justice League, depicted essentially as a government special ops team sent in to clean up the bigger messes.

Lois Lane considers them little more than terrorists, and immediately suspects them when scientists start getting murdered in gruesome ways that match the League’s methods. Superman, Batman and Wonder Woman start to investigate who might be framing them, but the unfamiliarity of these particular iteration of the characters makes it so that it’s not out of the realm of possibility that they could actually be guilty.

The movie pushes the limits of its ‘PG-13’ rating with sexual intrigue and a level of gore far beyond typical superhero fare. That’s not a detraction, it really fits with the tone of the piece. But viewers expecting a feel good “Justice League” adventure are duly warned.

The film is the masterchild of several veterans of DC animation, particular Bruce Timm, who is responsible for some of the most influential superhero animation of the 1990s and 2000s, most notably “Batman: The Animated Series.”

The story also throws in several references to established canon, sort of a nod to dedicated fans. And Lois is more or less the same as she is in other continuities, which clues in the audience as to what has changed. Lex Luthor has some familiar traits as well, before turning into the movie’s version of Stephen Hawking.

Gods and Monsters has a lot of fun with its premise and is hugely entertaining while setting up all the particulars, before losing some momentum as the mystery wraps up in the third act.

The film was promoted with a series of animated shorts, “Gods and Monsters Chronicles,” that appeared online. Those are not on the Blu-ray, but are easy to find on YouTube.

What the disc does have are the usual type of extras for these DC Universe movies: a few bonus cartoons with similar motifs as the main feature, and some behind-the-scenes featurettes, including a preview of the next DC Universe movie (in this case, a Batman adventure called Bad Blood, which serves as a sequel to Batman vs. Robin).

Among the featurettes, one deals with the making of the film itself, and how the story evolved into an alternate reality concept. The producers are big on explaining on how much of a risk the movie was to make because they were changed so much about what was familiar about these characters.

This ties into the other new featurette on the disc, which explores the concept of alternate realities in DC Comics history (often referred to as “Elseworlds.”) This one skirts around the notion that an alternate reality to a comic book storyline that itself is always evolving is kind of a silly thing.

Indeed, the Gods and Monsters universe isn’t itself an altered history to any particular DC continuity; it’s a spin on the typical stock versions of Superman, Batman and Wonder Woman that most people might associate with those names. Versions of those characters have appeared in countless separate stories that have no shared backstory or anything to do with each other. But it’s the essential elements that make those characters so iconic that are switched up here. After all, how is this version of the Justice League any less valid that the one most people already know?

Lastly, the disc includes a featurette, taken from an earlier DC Universe release, about comic book legend Jack Kirby and his New Gods characters, who feature significantly in Gods and Monsters.