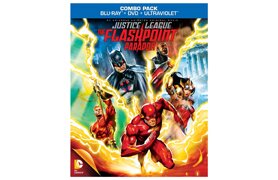 Alternate reality storylines are almost always entertaining — a fun way to view established characters in a new light without the usual storytelling constraints. Justice League: The Flashpoint Paradox is no different, showcasing a world devastated by twisted versions of well-known superheroes.

The film does a good job making a standalone story out of the 2011 comic book miniseries that ended up resetting the whole of DC Comics continuity. The movie does assume viewers have a passing familiarity with the core Justice League characters, while putting most of its focus on establishing The Flash for the audience. There are also a lot of cameos by minor comic book characters that should thrill hardcore fanboys. The Blu-ray comes with a great commentary in which a group of the filmmakers discuss many of the details they built into the movie.

After a major battle against his rogues gallery, The Flash awakens powerless as his alter ego, Barry Allen, and discovers everything he knows has completely changed. The Justice League doesn’t exist, and the world is threatened with destruction by a war between Aquaman’s Atlanteans and Wonder Woman’s Amazons.

Barry seeks out his former Justice League colleagues who do exist in hopes of discovering what happened to the timeline and fixing it.

This is no kiddie superhero flick, filled with bloody fights, characters getting shot in the head and body parts flying. While it cheats a bit with some storytelling shortcuts that gloss over a few details in order to preserve the plot’s central mystery, the depiction of the alternate reality is compelling enough to satisfy fans of the genre.

The Blu-ray includes two featurettes that expand on elements seen in the film. One focuses on The Flash’s villains, the other on theories of time travel. The disc also includes four bonus cartoons featuring The Flash, plus a preview of the next DC Universe animated movie, Justice League: War.

Superman vs. the Elite (Blu-ray Review)