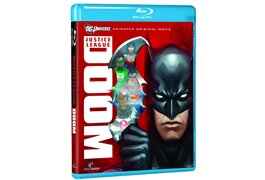 While the strength of the DC Universe line of animated movies seems to be adaptations of popular comic book storylines, occasionally one will come along that seems to be a hybrid of multiple sources without reflecting one in particular.

Justice League: Doom is loosely based on DC Comics’ 2000 “Tower of Babel” storyline, the main thrust of which was that Batman had formulated contingency plans to contain his Justice League colleagues if they ever went rogue. The plans were then stolen by a supervillain as part of a plot to take out the Justice League.

The producers of Doom also cite as inspiration a 2005-07 miniseries called “Justice,” which featured a modern take on the Legion of Doom, the supervillain organization from the “Super Friends” cartoon of the late 1970s and early ’80s.

The movie also makes a huge effort to include Cyborg, traditionally a Teen Titans member, who became a more integral member of the JLA during the recent comic book relaunch.

The end result is a mixed bag. The animation is solid, the action sequences are pretty good and the dialogue is sharp, but the story doesn’t hold up to much logical scrutiny. There’s a lot of unspoken backstory that longtime fans will pick up on, but will be lost on new viewers. But my biggest complaint concerns the final battle, in which all the heroes fall into the usual convention of fighting their own villains, when in this case it might have been more tactically sound to switch up with pairings that provide a better matchup. (Ror example, why does Superman isolate himself against Metallo, who is powered by Kryptonite, when Green Lantern could probably squash him in two seconds?) It still works in that many of these particular villains haven’t been featured in these movies before (one of them is Bane, who gets a central role in Christopher Nolan’s upcoming The Dark Knight Rises).

Ultimately, Doom plays within the established framework of these animated movies: grandiose scheming foiled by a big battle. Maybe would have been a more interesting take to focus more on the Legion of Doom aspect and present the story from the villain’s point of view.

The main featurette, “Guarding the Balance,” analyzes the story through a superhero-as-modern-mythology angle, somehow connecting the plot to every revolutionary or anti-government sentiment ever in discussing society’s relationship to authority figures (after all, superheroes don’t really answer to anyone).

Everything else related to the movie is pretty much covered in a filmmaker commentary, in which the producers come close to admitting that these movies are being made to promote the comic books.

The Blu-ray also includes a two-parter from the “Justice League” cartoon featuring the Royal Flush Gang, who appear at the beginning of Doom.

Finally, there’s something a little bittersweet about this particular movie, since the script was written by Dwayne McDuffie, one of his final projects before he died in February 2011 at age 49. McDuffie appropriately is the subject of a tribute documentary that serves as the centerpiece of the Blu-ray extras. It’s a heartfelt look back at his life and career, with particular emphasis on his role co-founding Milestone Comics, a line for minority artists.