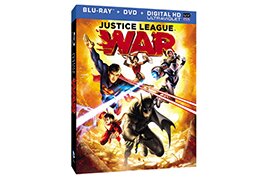 Disparate superheroes who don’t quite get along with each other are forced to team up to repel an invasion of robotic aliens who fly to Earth through giant portals. Sure, that’s the basic plot of The Avengers, but it also serves as the catalyst for another superhero group in Justice League: War. In the scheme of things, maybe there just aren’t that many events that would bring superheroes together.

To be fair, Justice League: War is based on the origin story crafted for the Justice League of America in DC Comics’ “New 52” reboot, which was first published at the end of 2011, several months before Joss Whedon’s Avengers movie hit theaters.

It’s also not even the first DC Universe animated movie to depict the origin of the Justice League, after Justice League: The New Frontier depicting an alliance of the iconic heroes in the 1950s.

In keeping with the intent of the “New 52,” War updates the story to a modern setting, kicking off with Green Lantern investigating an alien soldier in Gotham City, where he bumps into the mythical Batman. The aliens are leaving devices in various cities around the country, where other superheroes, such as The Flash and Superman, have discovered them. Seeing the clash of egos as the heroes cross paths for the first time is one of the highlights of the script. Particularly amusing is the way Batman chastises the impulsiveness of Green Lantern, who later finds himself in a similar position when dealing with the youthful Shazam (who replaces Aquaman in the story from the comics).

The alien devices eventually open portals to another world, spewing forth armies of half-robot alien drones led by Darkseid, thus forcing the heroes to overcome their differences and work together to save Earth.

This is one of the better DC Universe movies because the story maintains a good balance between character development and action, while the fight scenes are extensions of the story rather than excuses to give fans a cheap thrill. The animation is serviceable, although some obvious CG elements stand out among the landscape of the film’s traditional 2D style.

The 21-minute featurette “Deconstructing Justice League: War’ finds director Jay Oliva joining Jim Lee, the artist from the original comic book, to discuss certain scenes and the process of adapting the story for the screen, and why some elements were changed. Another featurette offers Oliva guiding viewers through the creation of a scene from animatic to pencil test.

But the highlight of the disc is “Creating Heroes,” a 37-minute featurette that chronicles Lee’s career, from his interest in art as a child to breaking into the comic book business, and evolving his style to become one of the most famous of all comic book artists. This piece alone is probably worth the cost of the disc for comic book fans.

The Blu-ray also includes bonus cartoons about the Justice League, as well as a preview of Son of Batman, the intriguing next entry in the DC Universe line.