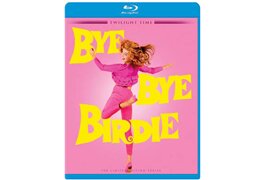 Available via www.ScreenArchives.com
Twilight Time, Musical, $29.95 Blu-ray, NR.
Stars Janet Leigh, Dick Van Dyke, Ann-Margret, Bobby Rydell.
1963. According to Julie Kirgo’s typically ace liner notes, smitten director George Sidney spent $40,000 out of his own pocket to film the famous opening where Ann-Margret (against a seriously true-blue backdrop) more or less comes out of a dream to belt a title tune that was not in the Broadway original. Ann-Margaret’s seminal role cast her as a storybook teen in Central Ohio selected from thousands to receive a ceremonial last kiss from an Elvis-parody of a rock star (Jesse Pearson as Conrad Birdie) just before his own drafting. And, this smooch is set to take place on “The Ed Sullivan Show” (with Ed, by the way, having what looks to be a grand old time playing himself here). Birdie may be the liveliest of Sidney’s stage-hit bunch — and may be the best musical of his very up-and-down career next to Judy Garland’s The Harvey Girls. For this, we can credit a good score with at least one standard (“A Lot of Livin’ To Do”), spirited casting (including Birdie stage vet Dick Van Dyke in his big-screen debut) and the bang-bang combo of Onna White choreography with brassy Johnny Green scoring.
Read the Full Review

Cinema Libre, Documentary, $19.95 DVD, NR.
1969. As documentaries on despots go, Saul Landaus’s Fidel isn’t up to the gold standard of General Idi Amin Dada, the 1974 Barbet Schroeder portrait that did, after all, provide shots of the former Ugandan president’s uncountable children by uncountable wives, hungry crocodiles observing peaceful river cruises from the sidelines and the hilarious scene where Amin cheats in a swim race (very much in the Sacha Baron Cohen mode). Still, Landau’s achievement does make a rather fascinating view and deserves more praise than what it merits for simply existing. I can’t imagine any political junkie who wouldn’t want to see it. Landau and his crew spent a week in 1968 with Cuban president Fidel Castro in the kind of great outdoors that is likely akin to where he lived and plotted his Cuban revolution — all as the dictator turned on charm that, at least superficially, seems a lot more natural than what we see from a lot of American politicians. We even see Castro in a pickup baseball game that’s worth the price of admission. There’s even a section on political dissidents, some of whom have been imprisoned and some who are seen preparing a move to Miami. This release, which includes a 23-minute featurette (“Cuba and Fidel”) and lots of illuminating newsreel footage in the main event, is still a remarkable surprise.
Read the Full Review

Available via WBshop.com’s Warner Archive
Warner, Comedy, $17.95 DVD-R, NR.
Stars Rod Taylor, Maggie Smith, Julie Christie, Michael Redgrave.
1965. John Ford directing Julie Christie sounds like one of those couldn’t-be miracles of ’60s cinema, but, in fact, it did happen. Though billed as “A John Ford Production,” MGM’s biopic of Irish playwright Sean O’Casey (called John Cassidy here) was an unfortunately timed project for Ford. Alcoholic Ford only managed to direct about 10 minutes of Young Cassidy’s 110 before leaving the picture for health reasons. But these include the early and (for Ford) quite sexy scene between lead Rod Taylor and euphemistically termed showgirl played by Christie. The Ford replacement who got solo on-screen credit was Jack Cardiff, an absolute contender to be called the greatest cinematographer ever.
Read the Full Review