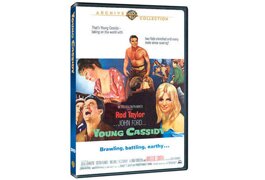 John Ford directing Julie Christie sounds like one of those couldn’t-be miracles of ’60s cinema, but, in fact, it did happen. Though billed as “A John Ford Production,” MGM’s biopic of Irish playwright Sean O’Casey (called John Cassidy here) was an unfortunately timed project for Ford, whose 1936 film of O’Casey’s The Plough and the Stars had, incidentally, been one of the weakest films of his career. Simultaneously mired in the commercial/critical debacle that was Cheyenne Autumn (termed "Cheyenne Awful" by MAD magazine), the alcoholic Ford only managed to direct about 10 minutes of Young Cassidy’s 110 before leaving the picture for health (also scotch) reasons. But these include the early and (for Ford) quite sexy scene between lead Rod Taylor and euphemistically termed showgirl played by Christie. In her bedroom and up against the wall, by the way.

This is a strange movie — and not just because it shares different directors, though, of course, serious viewers go nuts trying to guess who did what. The Ford replacement who got solo on-screen credit was Jack Cardiff, an absolute contender to be called the greatest cinematographer ever. But he was an indifferent director aside from Sons and Lovers (which Fox has never issued for the home market despite its best picture Oscar nomination and tie with The Apartment in the New York Film Critics’ circle voting for 1960’s best picture). Some reviewers at the time, including the New York Times’ Bosley Crowther, speculated that Ford must have directed a violent anti-British street riot in Dublin (we’re talking early 20th-century here) because many think it is the best scene in the picture. Actually, despite the fact that interesting things happen in it, I didn’t even think in ’65 that it was that well staged. It’s a little zoom-lens-ish for my taste and is in no ways as memorable as the Taylor-Christie bandying. There’s also a barroom sequence that Ford directed (not as memorably as its screen ancestors) that bring back warm memories of The Quiet Man and the rollicking middle sequence from The Rising of the Moon.

Instead, the strangeness comes from the debilitatingly scattershot nature of John Whiting’s otherwise grown-up script and a kind of maddening back-and-forth between decent scenes with those that feel tossed off. There’s also something about the color that isn’t right, and I’m not just talking about faded Metrocolor that hasn’t gotten any touch-ups in this “on-demand” release. I remember it seeming too modern for the period even in ’65. There’s also not a ton of chemistry between Taylor/Cassidy as a much more muscular version of O’Casey (a physique played up on the disc jacket, which replicates the original ad art) and a bookstore clerk played by Maggie Smith, who had one of her first major roles here.

On the other hand, think of what constitutes a mid-level pre-fall studio release today: a needless Total Recall remake or The Expendables 2. By contrast, Cassidy, which opened in March, deals with political agitating of historical dimension, romance between adults, the Abbey Theatre, William Butler Yeats (played by Michael Redgrave) and premature death due to poverty; there are also a lot of heavyweights in the supporting cast. Though never a world-beater, the movie has its moments, including the climactic audience rioting (over Plough’s honest treatment of Irish squalor) before a joltingly abrupt capper that should have been tweaked. And there’s an agreeable, if not standout, turn by Taylor, who was on the upswing after The Birds and Sunday in New York before getting done in by a series of non-starters in the mid-’60s and perhaps the lack of some essential stardom gene.

As for Christie in my adolescence, Young Cassidy is a movie I was waiting for at the time — not just because of Ford but because Christie’s still unforgettable performance in John Schlesinger’s 1963 Billy Liar had made such an impression (but, yeah, she could act, too). Just as 1964 was the year of the Beatles, ’65 was the year of Julie Christie — first with her too-small role here, then in her Oscar-winning performance in Schlesinger’s Darling (which opened in August) and then in her year-end capper a Lara in David Lean’s epic Doctor Zhivago. One of Ford’s biographers says that when Lean was considering her casting, Ford made up a reel of footage and sent it to him, which helped ice the deal. Seems very credible.

Ford had one more feature left — 7 Women — which was buried and drubbed at the time but has since come to be revered by, first, Andrew Sarris — and then Ford cultists and then by some feminist critics. Despite obvious imperfections, it is one of my favorite Fords (the final shot is one of the greatest of his six-decade career). It can also claim an Anne Bancroft performance that can stand with any she ever did, and I’m rather amazed that it hasn’t yet gotten Warner Archive treatment.