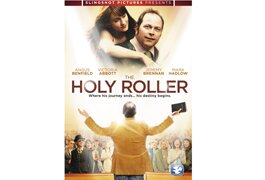 Angus Benfield said he set out to write a character that hit close to home while penning the screenplay for the uplifting drama The Holy Roller.

It turns out that the main character, Pastor Luke, is a lot like Benfield, an Australian actor-filmmaker who also is involved in ministry. In the film, which Image Entertainment releases Sept. 25 on DVD ($27.97), Benfield plays Luke, a genuine but out-of-touch small-town pastor.

When he relocates to the city, a shrewd club owner (Jeremy Brennan) convinces Luke to use the waning venue as a church. Luke quickly becomes a big-time televangelist, basking in the money and fame that come with his new platform. He also falls for a feisty singer (Victoria Abbott) who leads the congregation in worship songs. However, it’s only when Luke endures hardship that he truly learns what it means to exercise his faith.

“I developed this idea of, what would happen if a nightclub became a church?” Benfield said. “I thought it’d be a really cool idea to take this naïve, bumbling idiot and put him in this kind of world. I always thought it was interesting when you’re around people who are in the nightclub scene, and they find out that you’re a pastor, how they react is quite funny.”

Benfield, who preaches every now and then, said he could relate to Luke’s humble beginnings as the shepherd of a fledgling congregation.

“I was a youth pastor many years back,” he said. “I was part of a small church that was planted, and it was that whole process of trying to get it off the ground and hardly anyone turns up, and suddenly you have a lot of interesting characters that walk through the door. That wasn’t too much of a stretch for me.”

Pastor Luke reaches the masses with his simple, conversational lessons. For the bonus material for The Holy Roller, Benfield extracted some of those sermons from the film as a Discussion Guide designed for more in-depth bible study.

Other extras include a filmmakers’ commentary, a behind-the-scenes featurette, and an interview with Benfield and director Patrick Gillies.

“My main goal was to make a film that really anyone could watch,” Benfield said. “The spiritual message would be that God is in the gutter with everybody. He’s in these dark places and in nightclubs. There is always hope in those dark spots.”

That is especially true for those involved with the project, considering that the film itself was touched by tragedy. The Holly Roller has the distinction of being the last movie shot in Christchurch, New Zealand, before a major earthquake struck the city in February 2011. The disaster killed 185 people — including some of the film crew’s friends and extended family members — and decimated many structures.

“That probably resonates with a lot of people,” Benfield said. “We were down there doing post-production when it happened. A lot of the buildings we filmed aren’t there any more or are being brought down. It’s sort of an interesting timing thing as well.”

Benfield noted that the exact day the earthquake hit, he was visiting a theater that he hoped would host the film’s premiere. The Holly Roller screened in Christchurch as part of the New Zealand International Film Festival in September 2011.

“It was a bit of an eerie thing,” he said. “I think people have mixed feelings. Some people might have found it a bit sad. We had some people who couldn’t quite bring themselves to watch it, as it is when you go through something like that.”