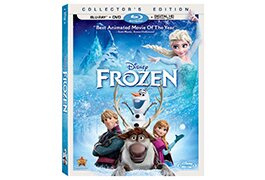 Loosely inspired by Hans Christian Andersen’s The Snow Queen, the 53rd entry in the Disney Animation Studio line-up strays a bit from the usual fairy tale formula while remaining firmly planted in the genre. The primary twist involves adding a sympathetic edge to a character who may have been developed into a villain in an earlier era, leading instead to a story of estranged sisters reconnecting.

Those story quirks are likely the reason the studio took so long to make the film, which had been on the books as a potential project since the 1940s, when Walt Disney himself was in talks to provide animated sequences to a film about Andersen’s life. Indeed, it would be another 40 years before Disney’s studio would adapt one of Andersen’s stories, The Little Mermaid. One of the making-of featurettes included with the Blu-ray even reveals how Disney considered adapting The Snow Queen into a Disneyland ride.

Frozen stars Kristen Bell and Broadway star Idina Menzel as the voices of Anna and Elsa, princesses in a northern land who are forced apart by Elsa’s magical but uncontrolled powers over ice and snow. With Elsa poised to become queen, she loses control at her coronation and plunges the kingdom into winter. After Elsa flees into the mountains, Anna vows to bring her home to restore the kingdom, oblivious to the threat of outside forces.

While the story could have worked as a traditional 2D animated film, the snow motif lends itself nicely to CGI, particularly in the “Let It Go” musical sequence. The other songs are catchy as well and a worthy addition to the Disney musical tradition. There’s a music video for “Let It Go” by Demi Lovato included with the disc, but the pop-infused orchestration of the song within the film renders this version rather extraneous.

The Blu-ray also includes seven minutes of deleted sequences and alternate takes on the material, plus a musical “making of” featurette with the cast that results in a bit of an amusing surprise, although it does call attention to what the disc is really missing.Finally, the Blu-ray includes the whimsical short film Get a Horse! The short stars Mickey Mouse trying to save Minnie from old nemesis Peg-Leg Pete in a 1930s-style black-and-white cartoon, until he’s forced into the world of 3D color CG-animation. This is a great tribute to the spirit and history of Disney animation.

Princess and the Frog, The (Blu-ray Review)