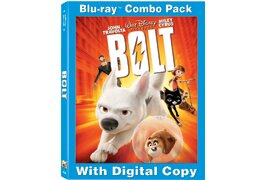 Between the movie’s colorful characters, bright animation, action-movie send-ups and timeless themes, there’s plenty here for both kids and adults to love. This loaded Blu-ray edition should be more than enough to appease fans.

Bolt is basically Toy Story with a dog, with the emphasis on the bond between people and their pets. John Travolta voices the titular pooch, a TV dog lost in the real world on a journey to reunite with his human pal, voiced by Miley Cyrus. To take advantage of Cyrus’ “Hannah Montana” heat, the disc includes an “I Thought I Lost You” music video with Cyrus and Travolta. It’s been so many years since Grease, I forgot Travolta can sing. The featurette “In Session With John Travolta and Miley Cyrus” interviews the pair about performing the duet..

The film’s intended break-out supporting character, the hamster sidekick Rhino, gets his own adventure in the clever short Super Rhino, which serves as something of a spoof of the main film.

The making of Bolt is covered in three short featurettes that are informative but not ground-breaking. “A New Breed of Directors: A Filmmakers’ Journey” deals with the creative process, led by first-time directors Chris Williams and Byron Howard. “Act, Speak! The Voices of Bolt” offers discussions with the cast. And “Creating the World of Bolt” dissects the animation process, focusing on how CGI was used to simulate painted backdrops. The technique helps to give the film a classic look and really puts more of the spotlight on the characters.

Two deleted storyboards offer alternate takes on a key scene, but one of them may have been too brutal for kids to see.

Rounding out the experience are a couple of games exclusive to the Blu-ray version. “Bolt’s Be-Awesome Mission” is a fun diversion in which players guide Bolt to complete various levels to stop the Green-Eyed Man’s evil scheme. The complexity is about on par with a 1980s game console, but it’s pretty addictive.

The disc’s BD Live extension offers a trivia game that can be played against others over the network. This is a common extra on discs with BD Live, but it’s probably too soon to tell if it will catch on. When I signed on, the games were active, but no one else was playing.