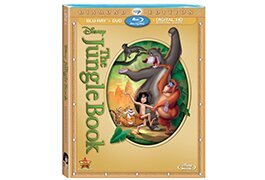 It’s remarkable how deceptively simple some of the Disney animated classics really are when it comes to storytelling, with a basic plot serving as little more than an excuse to introduce eccentric characters and catchy songs. That speaks to the unique genius of Walt Disney, who knew how to craft a film to leave a lasting impression with his audience.

Take Disney’s 1967 adaptation of The Jungle Book, for example, which to many serves as the definitive version of the Rudyard Kipling stories despite the liberties taken with the source material.

Disney’s version gives us the tale of the man-cub Mowgli, who was discovered as a baby in the jungles of India and raised by wolves. After 10 years, the wolves decide Mowgli should return to human society. As Bagheera the panther escorts him to a nearby village, Mowgli encounters a series of animal characters, each with a different song to sing (including the classic “Bare Necessities”). Mowgli wants to stay with Baloo the bear, but Bagheera understands the village is Mowgli’s best protection from the villainous tiger Shere Khan (not that hanging out with wolves, a panther and a bear are recommended actions for a young boy).

The animation is lively and really brightens up the screen in high-definition. The colors are perfectly rendered, and the image is sharp enough to see the rough edges of the original animation lines, which just gives the drawings more character.

Not only have the Disney depictions of Baloo and Shere Khan (perfectly performed by Phil Harris and George Sanders, respectively) become iconic, but so has Louis Prima’s turn as Louie the orangutan, which is rather amazing considering the character was created for the film and hangs around just long enough to sing the film’s other showstopping number, “I Wanna Be Like You.”

The three characters were later revamped into their own TV show, the fondly remembered “Talespin,” in 1990. However, the disc doesn't delve into “Talespin,” the oft-derided 2003 animated sequel Jungle Book 2, or any of the studio's other projects based on Kipling's original works.

However, the Blu-ray does include an alternate ending that adapts other elements of Kipling’s “Jungle Book” tales. The lengthy sequence, presented as storyboards with newly recorded narration, involves Mowgli returning to the jungle after running afoul of a hunter who lives in the village and has eyes for golden treasure hidden in ancient ruins visited by the boy.

A “Bear-E-Oke” mode presents the film’s songs as music videos with sing-along text, accessible either on their own or through an optional intermission function that plays when the film is paused.

Also new to the Blu-ray is the 10-minute featurette “Music, Memories & Mowgli,” in which Diane Disney Miller, Walt’s daughter, joins songwriter Richard M. Sherman and animator Floyd Norman to discuss the production of the film. Sherman and Miller also provide separate introductions to the film. Miller passed away in November, so her video reflections are particularly poignant.

Another featurette follows two Disney Channel stars as they tour Disney’s Animal Kingdom theme park, paying particular attention to the animals depicted in The Jungle Book. This is an interesting look behind the scenes of the park, if an obvious plug for several Disney properties.

The Blu-ray carries over most of the great bonus material from the “Platinum Edition” DVD from seven years ago, which are prime examples of how adept Disney has become at presenting extensive behind-the-scenes documentaries that really drive home why the studio's animated masterpieces are so entertaining.

These extras mix just the right balance of retrospective commentary and archival footage to give viewers a nearly complete picture of how the 1967 film came to be. It's especially fascinating to see the current crop of animators offering not only historical context, but anecdotes from the day, like some oral tradition passed down through the ages among the members of an exclusive brotherhood.

Many of the current animators talk about how influential The Jungle Book was on them. The character designs inspired the look of the animals in The Lion King nearly 30 years later.

The Jungle Book marked an important transition for the Disney animation studio, as it was the last film personally overseen by Walt Disney before he died. The Sword and the Stone faltered when Walt's attentions were turned elsewhere, and he wasn't willing to let The Jungle Book suffer the same fate. Walt's death kicked off a 20-year decline for the animation studio, until The Little Mermaid in 1989 (with all due respect to The Rescuers and The Fox and the Hound).

Other featurettes focus on the tremendous voice cast, the deleted character Rocky the Rhino, and the life of Bruce Reitherman, the voice of Mowgli, who embarked on a successful career as a nature photographer.