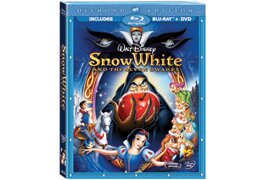 During its production, Snow White and the Seven Dwarfs had been known as “Disney’s Folly” in the industry press. But Walt Disney (and his financiers) had faith that it would work. Upon its release in 1937, the film was hailed as a masterpiece.

On Blu-ray, the film has probably never looked or sounded this good. The “Diamond Edition” presentation has restored the film’s original RKO opening and end title sequences (which had been missing since the 1950s and were only included as an extra in the 2001 “Platinum Edition” DVD release). If there are any imperfections in the high-def master, they are only a by-product of the animation techniques being more than 70 years old. The film employs one of the brightest, cheeriest color palates ever committed to celluloid.

In fact, several speakers on the new disc make the bold claim that success of Snow White as bright colorful family entertainment inspired MGM to greenlight The Wizard of Oz (and changed the film industry and life as we know it forever, etc.).

But the extras elevate this “Diamond Edition” to a virtual Disney museum in a box.

The process of creating Snow White, the first full-length animated feature in American cinematic history, isn’t too dissimilar from what Pixar animators went through more than 50 years later to produce CG-animated films. Disney animators created a number of short cartoons used to experiment with and perfect techniques that would be needed to construct a feature-length cartoon. Many of these short films are included with the Blu-ray: 1928’s Steamboat Willie (sound), 1932’s Flowers and Trees (color), 1934’s The Goddess of Spring (human character animation), 1934’s Playful Pluto (personality animation) and 1937’s The Old Mill (multiplane camera).

The bulk of behind-the-scenes material is presented through a virtual tour of Hyperion Studios, the original Disney animation facility where Snow White was made. (Disney would build a new studio in Burbank with the profits from the movie.) An index of the available material is available for those who don’t have the patience to let the menus load.

The disc also includes an interesting archive find: Snow White Returns, an unproduced short that serves as a sequel to the film, designed to make use of unused sequences from the movie.

Most of the 2001 extras have made their way to the “Diamond Edition.” The most notable omission is the 2001 retrospective making-of featurette, which has been replaced by a new documentary more similar in tone to those found on other recent Disney DVDs.

The primary holdover from 2001, Disney Through the Decades, starts with the notion that Snow White gave rise to the Disney empire, and traces the influence the film has had on the studio over the years. A new intro and an updated 21st century segment are included.

The Blu-ray itself is hosted by a wisecracking Slave in the Mirror, who discusses the weather and makes recommendations to the viewer. Viewers can get more of the mirror with the Mirror, Mirror on the Wall Disney Princess personality profile quiz.

Other games include the addictive Jewel Jumble, a Tetris knockoff; What Do You See?, a photo recognition game; and the puzzle-solver Dopey’s Wild Mine Ride, a holdover from 2001.

Another neat activity is the “Scene Stealer,” which uses BD Live to let users upload a photo that is inserted into the movie as a dwarf.

The Blu-ray also includes a music video of Disney Channel starlet Tiffany Thornton singing a pop version of “Some Day My Prince Will Come.” While Disney’s continued inclusion of these musical updates is annoying, this version is certainly more tolerable than Barbra Streisand’s throaty rendition from the 2001 DVD (which thankfully is not included here).