Get a Shirt With 'Ride Along 2'

The retail shadow of Star Wars: The Force Awakens extended into the week of April 26, as a modest slate of new releases didn't come with much in the way of retailer exclusives.

The only exclusive of note came at Walmart, which offered a pack-on T-shirt with the Blu-ray of Universal's Ride Along 2.

Otherwise, there weren't many exclusives offered with new titles, with many displays still dominated by Star Wars: The Force Awakens.

Target is offering a $5 gift card with preorders of Fox's Deadpool on disc May 10.

With Star Wars: The Force Awakens continuing to dominate retail shelves, studios shied away from major new releases for the most part April 12, with the only notable exclusive involving the latest direct-to-video "Justice League" animated movie.

That exclusive came at Target, which offered a steelbook case for Warner's Justice League vs. Teen Titans.

The home video debut of Star Wars: The Force Awakens April 5 brought with it a flood of merchandising displays tied to the movie, as well as several retail-exclusive editions.

Target devoted two pages in its weekly ad circular to "Star Wars," including a coupon for $10 off $50 of "Star Wars" merchandise and $25 off $100 in merchandise. Target billed its version of the film as a "double exclusive," as it includes both special fold-out packaging and exclusive bonus featurettes, including an interview with film stars Daisy Ridley and John Boyega. The bonus features are accessible digitally through the Disney Movies Anywhere redemption code.

Best Buy had the Blu-ray in a steelbook case with Kylo Ren on the cover. This kind of matches the earlier-released individual Blu-rays of the first six films, although the design is slightly different, mostly in how the titles are presented.

Walmart offered the Blu-ray with a special slipcover with fold-out BB-8 art, plus a Star Wars Galactic Connexions trading disc.

Toys "R" Us offered a free Kylo Ren decal with the purchase of the film on DVD or Blu-ray.

Stores also set up elaborate cardboard displays for the title, with Best Buy and Walmart showing off a large BB-8 with DVD shelves. Some Targets had a large cardboard display themed around the film's characters.

Sandwiched between the disc debuts of The Hunger Games: Mockingjay — Part 2 and Star Wars: The Force Awakens, March 29 proved to be a rather slow week for new home video releases. Still Anchor Bay's The Hateful Eight was available with a couple of exclusive retail editions.

The latest Quentin Tarantino film was available at Best Buy in an exclusive steelbook edition.

Target offered the Western with collectible lenticular packaging and an exclusive behind-the-scenes featurette.

Speaking of "Star Wars," Target is particularly ready for the April 5 DVD and Blu-ray arrival of The Force Awakens. Many Target stores have "Star Wars" merchandise displays set up next to the new-release section, as well as other decorations around the store, such as life-size Stormtrooper decals greeting guests at the front doors.

It comes as no surprise that the three major retail chains each had their own exclusive edition of Lionsgate's The Hunger Games: Mockingjay — Part 2.

Target offered a three-disc version of the Blu-ray with fold-out packaging and an exclusive bonus disc containing 45 minutes of extra content.

On the preorder front, Warner has yet to release Batman v Superman: Dawn of Justice in theaters, but stores already have in-store packages to preorder the film on Digital HD. The promotion includes three character trading cards and an $8 coupon to see the film in theaters. Best Buy offered the preorder for $22.50 and Walmart had it for $24.96. Best Buy also touted other DC Comics-based movies and TV shows with the $8 coupon. 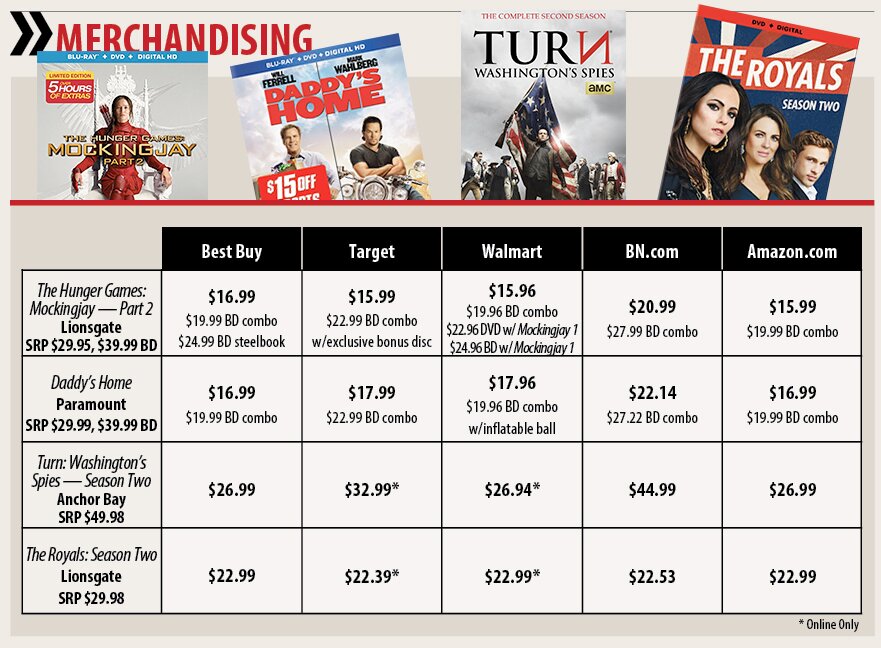 Target included a 28-minute featurette about the "Massacre at Hardhome" episode with Blu-rays of the show.

Walmart's Blu-ray had a 30-minute look at the visual effects of the season.

Both Blu-ray and DVD copies at Barnes & Noble included the 26-minute "The Final Step" look at post-production.

Best Buy offered exclusive box art variants, letting fans choosing from the sigils for the Targaryen, Martell and Bolton families, with the latter being an online exclusive. 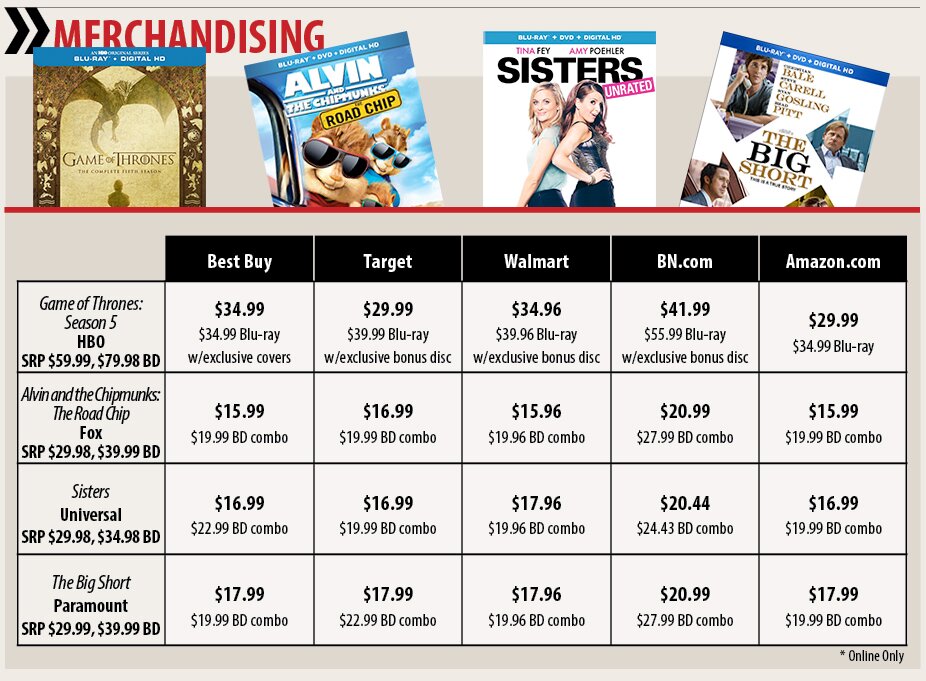 Fox's The Peanuts Movie was the big new title on March 8, drawing the lion's share of shelf space and promotional interest.

The most notable retail exclusive came at Target, which offered an 25-minute bonus DVD with the featurettes ""The Voices of The Peanuts Movie," "The Art of Dreaming Big" and more. Peanuts Movie discs at Target also included a coupon for a free popcorn and soda at the Taret Café, though it should be noted that many Target stores, at least those in Southern California, have temporarily closed their in-store eateries for renovations.

Also of note about The Peanuts Movie is that it is the first title to receive a date-and-date UHD BD release, after the format officially launched a week ago. Best Buy was the only chain to carry the UHD version in stores, and notably stocked such copies in the new-release section next to the other formats of the title, and not with the other UHD BDs in the 4K section.

The official debut of Ultra HD Blu-ray didn't get much fanfare at retail, with Best Buy the only big chain really promoting the new 4K format.

Some Best Buy stores have been selling the Fox UHD BDs for a few weeks, and a store in Costa Mesa, Calif., did set up a dedicated section for the titles, which expanded on March 1 to include Warner, Sony Pictures and Lionsgate titles, all for $29.99 each. Clerks on the floor, however, weren't very helpful in guiding customers toward it. One clerk, while standing less than 10 feet from the rack containing the titles, said the store hadn't set up a display, and suggested checking the UHD display in the TV department. A clerk there wasn't aware of a display either, suggesting a few titles were distributed with the new releases (they weren't), though one of the customers there was able to say where the actual display was, nestled next to the 3D Blu-ray section in a middle aisle.

In terms of retail exclusives for the weeks' new titles, Warner's Creed came with a steelbook Blu-ray at Target, while Walmart once again offered its bizarre extras-free DVD option without bothering to stock the regular edition, even though their vanilla version is the same price with different box art. Given how few extras were actually on the disc to begin with, it's a wonder why Walmart thinks such a thing is still a worthwhile exclusive, or why the studio bothers giving it to them.

Walmart also offered a two-pack of Sony Pictures' The Night Before DVD with a double feature DVD containing The Interview and This Is the End.

Another Walmart exclusive involved a special edition of Cinedigm's God's Not Dead, containing an exclusive preview of the sequel accessible through the Vudu.com streaming service. The DVD cost $12.96. 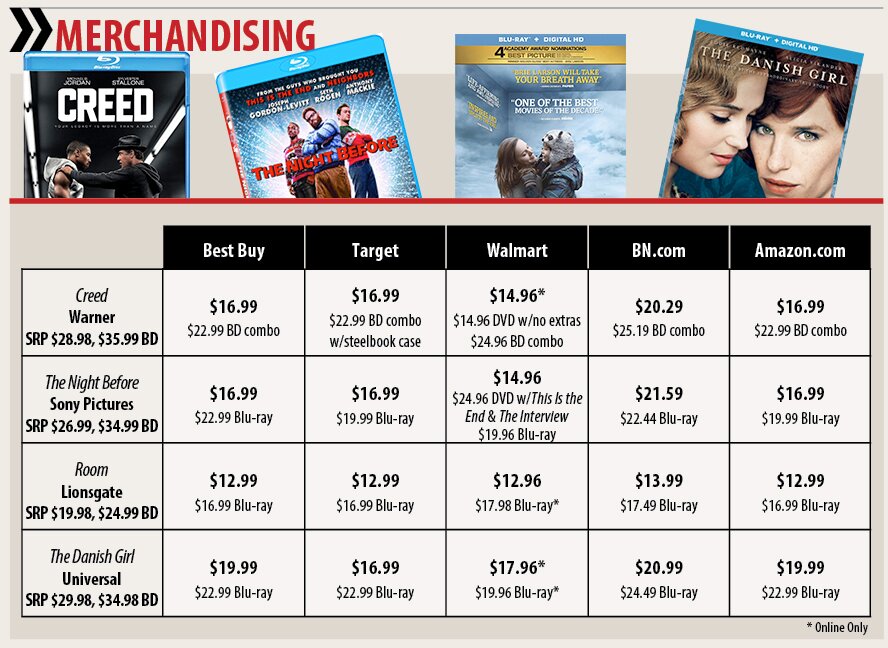 Disney's The Good Dinosaur didn't arrive at retail with the same level of excitement as previous Pixar movies, but that didn't stop some retailers from hooking it up with some exclusive content.

Target offered the Blu-ray versions of the film with an exclusive featurette and a deleted scene accessible via the Disney Movies Anywhere website.

In another interesting move, Target used the upcoming debut of Netflix's "Fuller House" to plug the DVD of the first season of "Full House" for $9.99. 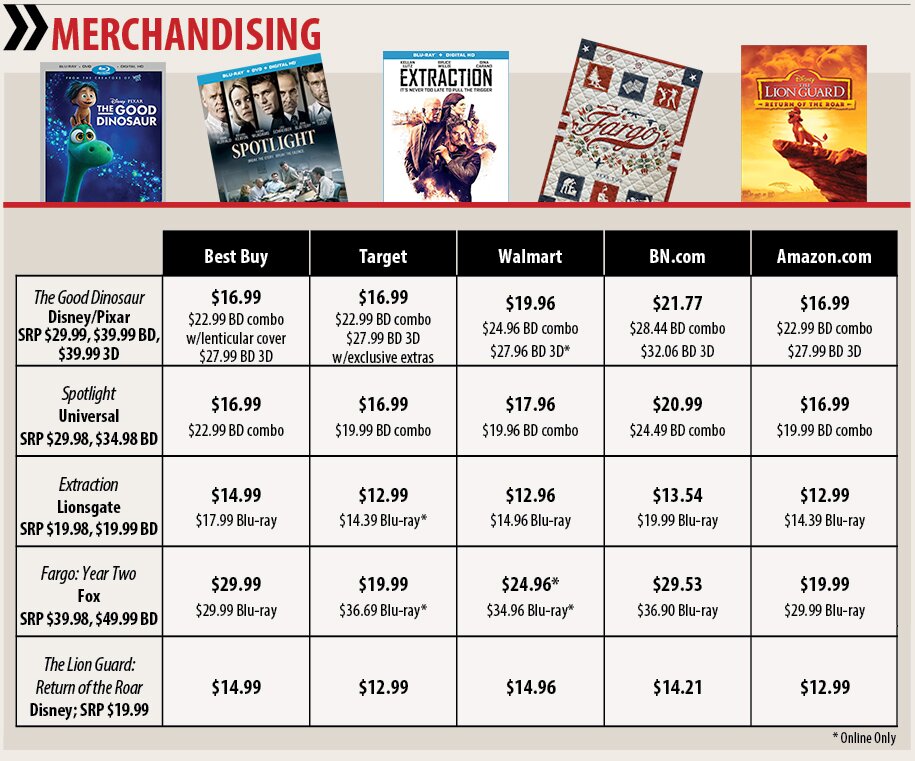