The new home video releases for Feb. 16 were dominated by a slate of docudramas and a couple of high-profile HBO comedy series, once again ceding a majority of the new-release section shelf space to Fox's Spectre. New titles include Universal's Steve Jobs, about the Apple Computer co-founder, and Trumbo, about the blackblisted Hollywood writer, and Warner's Black Mass, about mobster Whitey Bulger, and The 33, about the Chilean mining disaster.

Interestingly, Best Buy, Target and Walmart all relegated Universal's Trumbo Blu-ray to an online-only title, stocking only the DVD version on shelves.

For the most part, stores touted sales of catalog titles. Best Buy offered DVDs for $3.99 each and Blu-rays for $6.99 each, with many Fox titles including  coupons for discounts off movie tickets to the new hit film Deadpool. Best Buy also had TV seasons as low as $14.99 each.

There were several reports that Best Buy would start offering new Ultra HD Blu-rays from Fox on Feb. 14, but the store in Costa Mesa, Calif., didn't have any copies on display (though the chain's website does indicate a few titles available for pickup). The bulk of the first wave of UHD Blu-rays from Fox, Lionsgate and others are due March 1. 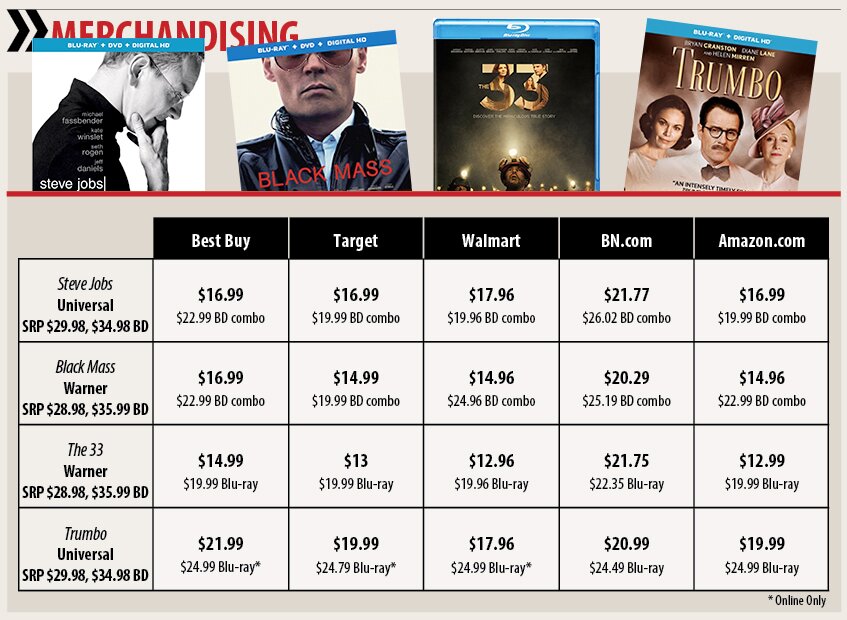 The latest James Bond film, Spectre, arrived at retail Feb. 9 with several options for retail exclusives of the Fox-distributed title.

Best Buy offered an exclusive steelbook Blu-ray case with the film, with a $5 savings when purchased with a previously released Bond Blu-ray steelbook.

Target offered the DVD and Blu-ray with an exclusive bonus DVD containing 20 minutes of content, including a featurette about the title sequence and a music video for the theme song. The disc also included the "Shadow of Spectre" featurette that was available in the Bond collection boxed set released last year, but updated to include the new film.

Walmart went with its usual gimmick and offered a bare-bones DVD version of Spectre with special box art, which is kind of a head-scratcher since the only extra on the regular DVD is a 10-minute bundle of video blogs, and Walmart's vanilla DVD was offered at the same price as the other stores were offering the standard DVD (or, in Target's case, a DVD with a bonus disc). At least Walmart also offered the regular DVD as well for a few dollars more. 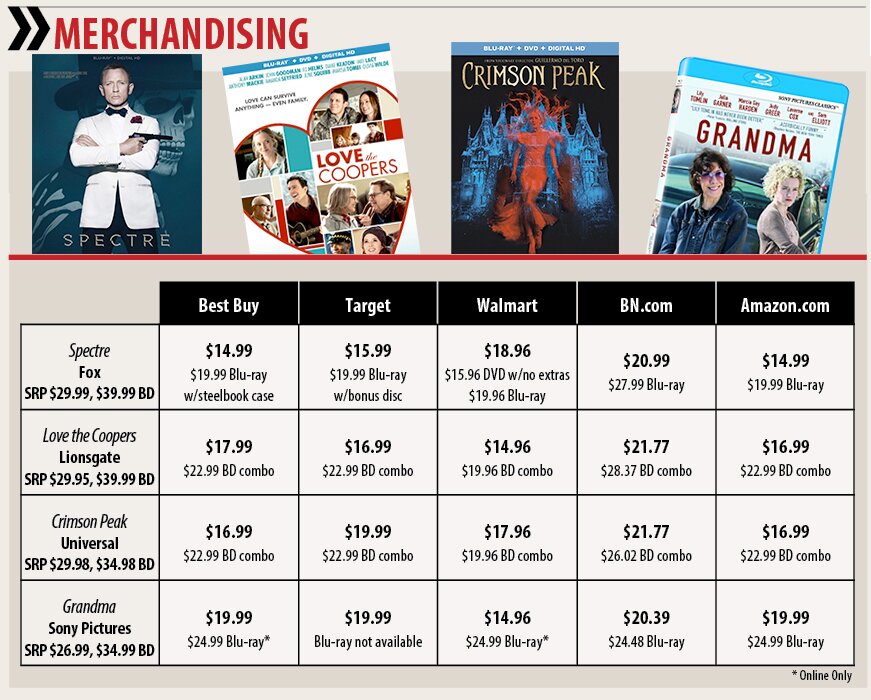 At least three of the major Feb. 2 new releases were offered with retail exclusives presenting some sort of packaging variant.

Disney's Snow White and the Seven Dwarfs: The Signature Edition Blu-ray came in special storybook packaging at Target, while Best Buy had the re-release of the animated classic with a slip-cover adorned with lenticular artwork.

As part of its incentives for pre-orders, Best Buy offered $5 in My Best Buy membership rewards for several titles, as well as special exclusives for each. Lionsgate's The Hunger Game: Mockingjay — Part 2 and Fox's Spectre Blu-rays will come with steelbook cases; Disney's The Good Dinosaur Blu-ray will come with lenticular packaging; and Fox's The Peanuts Movie will include a Snoopy toy. The membership rewards deal also includes Star Wars: The Force Awakens.

Deals Designed to Give Shoppers 'Goosebumps'

Retailers were quick to attach exclusives to Sony Pictures' Goosebumps upon its Jan. 26 DVD and Blu-ray release, but PBS's Downton Abbey: Season 6 also got some love.

For Goosebumps, Best Buy offered the Blu-ray combo pack (not the 3D version) with a pack-on "Goosebumps" book, A Shocker on Shock Street.

Walmart is touting the digital release of the James Bond movie Spectre with a combo deal attaching access to the film via Vudu.com with DVD versions of previous Bond films. Spectre with Casino Royale, Quantum of Solace and Skyfall was offered at $22.96 each combo, with Spectre and the whole Daniel Craig collection offered at $27.96. 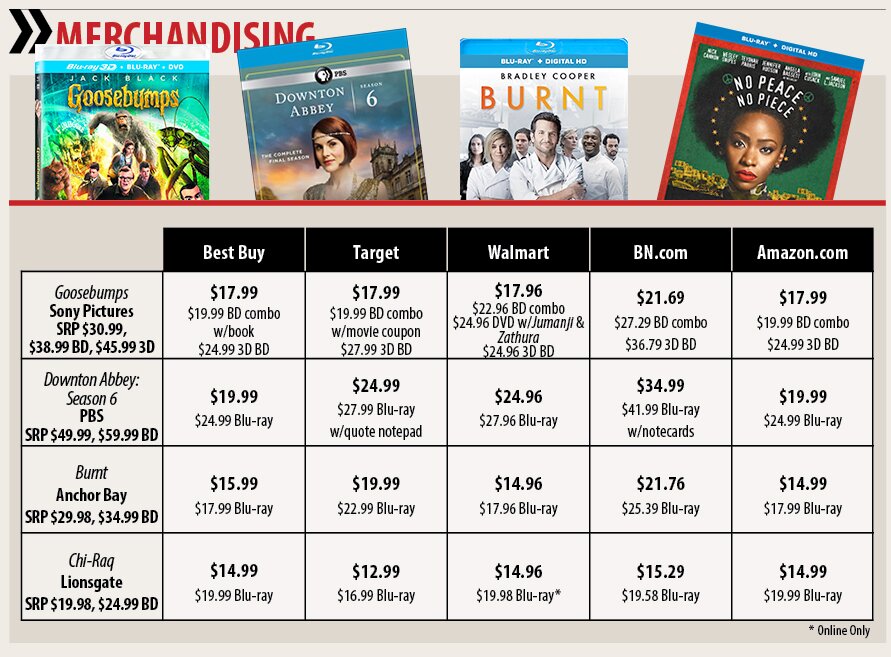 These Exclusives Are 'Straight Outta Compton'

Fans of Universal's Straight Outta Compton had a choice of several retailer exclusives when they went to pick up their copy on Blu-ray.

Target offered the Blu-ray in a steelbook case, plus a $5 gift card when the movie was purchased in conjunction with the CD soundtrack (offered at $13.99).

Walmart touted an exclusive special-edition of the Blu-ray with 30 minutes of additional bonus content available through its Vudu.com streaming service.

Both Target and Walmart neglected to offer in stores some of the new TV on disc titles, such as Universal's 12 Monkeys: Season One and Continuum: Seaosn Four. Both were readily available at Best Buy. 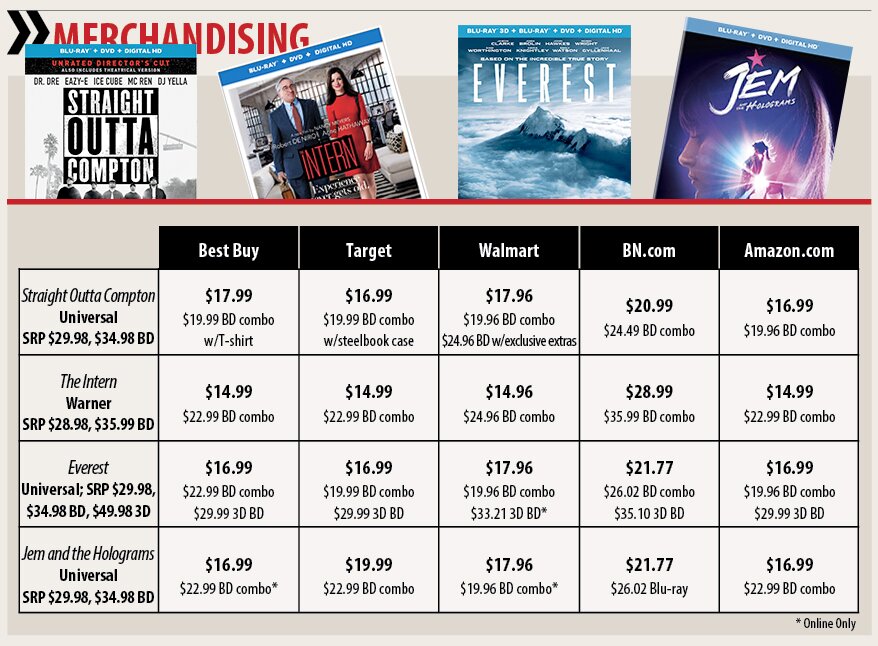 Checking In With 'Hotel Transylvania 2' Exclusives

Target offered the BLu-ray combo pack of Hotel Transylvania 2 with glow-in-the-dark stickers, and gave free popcorn and a medium soda at the Target café with the purchase of any version of the film on disc.

Target's version of the "Mr. Robot" DVD included 20 minutes of exclusive bonus material, while Best Buy offered the Blu-ray of the show with a free decal.

Paramount's Paranormal Activity: The Ghost Dimension didn't seem to be available at Target, with the horror sequel not even showing up on the chain's website on its first day of availability.

Also interesting, Amazon.com didn't seem to have any copies of Fox's The Martian on DVD, referring instead to Amazon Marketplace sellers. Amazon does have the 4K UHD version of The Martian listed for a March 1 release.

While most of the new releases for Jan. 5 didn't inspire much in the way of retailer exclusives, there were a few deals and add-ons to be found.

Best Buy offered alternate covers for HBO's True Detective: The Complete Second Season, giving consumers a choice of picking up the Blu-ray with either Vince Vaughn or Colin Farrell adorning their copy.

In terms of general marketing, Sony Pictures bowed The Walk VR Experience App, letting iPhone and Android users simulate the high-wire act atop New York's World Trade Center depicted in the film. The disc includes an online discount code for $15 off a pair of $100 MergeVR goggles.

With 2015 coming to a close, the new releases of the final week of the year went mostly unheralded at retail.

In fact, a Target store in Tustin even neglected to put Fox's Hitman: Agent 47 on its shelves, though it's not unheard of for clerks to forget to bring new releases to the floor. The action film comes with a pack-in comic book, a bonus heavily touted in Best Buy's weekly ad circular.

The week was primarily dominated by clearance sales.

Target touted clearance discounts on hundreds of video games, as well as discounts on recent hit DVD and Blu-ray movies.

Best Buy even had a seperate display for the preorder, which consists of a limited-edition package of three mini-posters from the film's marketing campaign. Best Buy's preorder price is $24.99.

Walmart offered the preorder package in its new-release section, for $24.96.

Best Buy is also taking preorders for HBO's Game of Thrones: The Complete Fifth Season for a $10 deposit. Fans can choose from exclusive covers depicting the house sigils for either the Martells or the Targaryens. The Blu-ray arrives March 15.

In addition, Best Buy is offering a $1.99 Minion scarf with the purchase of Universal's Minions, one of the "Despicable Me" movies or from a selection of 15 titles.

Target is offering a $10 gift card with preorders of Fox's The Martian on DVD or Blu-ray. The film arrives on disc Jan. 12. Target is also giving away $10 gift cards with the purchase of two movies from a select list.

Walmart has a special DVD gift set pairing Sony Pictures' War Room with other faith-based titles from the same production team: a two-pack of Courageous and Facing the Giants.

With the holiday shopping season picking up, four big titles hit retail Dec. 15 and each had a variety of retailer exclusives to entice customers — Paramount's Mission: Impossible — Rogue Nation, Universal's Ted 2, and Fox's Maze Runner: The Scorch Trials and the Fantastic Four reboot.

Each of the four was available with a special steelbook case — Rogue Nation, Scorch Trials and Fantastic Four at Best Buy and Ted 2 at Target. Best Buy also offered a steelbook of a collection of all five "Mission: Impossible" films for $39.99, and a steelbook of the first Maze Runner for $14.99. Shoppers who bought both "Maze Runner" steelbooks could save $5.

Best Buy offered Ted 2 with a tie-in promotional opportunity to buy a plush talking Ted doll for $4.99 with purchase of the film on Blu-ray. (the bear on its own is priced at $9.99).

Walmart offered a DVD two-pack of the "Maze Runner" movies and a Blu-ray gift set of Ted 2 with a "Legalize Ted" T-shirt.

Amazon seemed to be having some inventory issues with Ted 2, Scorch Trials and Fantastic Four, listing Blu-rays (and the Ted 2 DVD) as available in a few days or as out of stock. This comes in the wake of Amazon dropping preorders for many Fox titles.