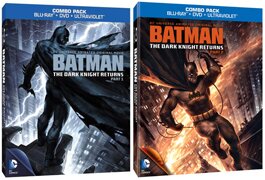 Frank Miller’s The Dark Knight Returns, originally published as four issues in 1986 and later collected as a graphic novel, is often cited as one of the landmark comic books of all time. It earned this stature not only due to its immense popularity among Batman fans to this day, but also for the impact it had on the industry, helping to usher in an age of grittier superhero in the 1990s.

It certainly influenced the “Batman” movies, in particular Tim Burton’s 1989 franchise starter, and especially Christopher Nolan’s trilogy from just the past few years.

It tells the story of an aging Bruce Wayne, now in his 50s and 10 years after retiring as Batman, yearning to return to action as crime continues to plague Gotham City. After he once again dons the cape and cowl, his actions inspire ordinary citizens to stand up for what is right, including a young girl named Carrie Kelly who appoints herself the new Robin. Batman’s activities are seen as a threat to government control, so the president sends Superman to stop him, leading to an epic final battle between the two icons.

The two-part DC Universe animated movies based on the graphic novel are probably as faithful an adaptation as will be found of them, as was the case with the earlier adaptation of Miller’s Batman: Year One. Even the 1980s setting is retained visually, with an unnamed president of the United States who looks and sounds like Ronald Reagan. The respect for the source material is obvious, though it’s a bit surprising just how much of the violence carried over, and even was enhanced by the animation.

Part 2, for example, may be one of the bloodiest mainstream cartoons ever made, pushing the limits of its ‘PG-13’ rating. The most controversial scene, given the recent debate over gun violence, has to be the depiction of The Joker rampaging through a carnival ride shooting random people. The scene works for the story, but the timing of the release so soon after Sandy Hook is unfortunate. As it was, a scene from the graphic novel depicting a gunman shooting up a theater was not adapted for Part 1, which was released just a few months after the Aurora, Colo., shooting at a Dark Knight Rises screening.

As close as the films adapt the books, it’s still not as simple as following along with the graphic novel. Scenes have been rearranged and simplified, and dialogue has changed, to fit the parameters of film. The second part especially depicts scenes that aren’t in the book but could be inferred by the story. One of the extras on Part 2 offers director Jay Oliva commenting on 45 minutes of storyboard footage about how they went about translating the book to screen.

The decision to split the book into two films works out because of how they separated the stories. The first part focusing on the return of Batman works best as a standalone movie, with Part 2 as a sequel covering the government’s response to him. They also work well together as a longer film presenting one of the essential Batman stories ever told.

Other extras on Part 2 include featurettes about The Joker and the Batman vs. Superman fight. Part 1 includes featurettes about the Carrie Kelly Robin and Batman creator Bob Kane. Both discs include bonus Batman cartoons from various animated series from the past few years.