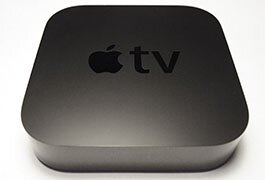 Apple CEO Tim Cook said the 30% price cut to the $99 Apple TV (to $69) was done in honor of 25 million units sold. The fact the reduction was announced on the same stage HBO detailed further plans about an OTT video service exclusive (for 90 days) to Apple TV, underscores the competitiveness of streaming media devices.

Streaming devices, which are conduits linking Internet video and the television, include the Google Chromecast ($25) HDMI stick, sub-$50 HDMI sticks from Amazon and Roku, and a range of streaming boxes ($50-$99) from Roku, Google and Amazon, among others.

Apple TV’s sales growth has slowed over the past few years as the level of competition within this market has accelerated. The new $69 price is likely in response to changes in the market and the growing success of Google Chromecast, according to IHS.

The research firm forecasts that 8.7 million Chromecasts shipped in 2014, outselling Apple TV’s 8.3 million units shipped. Chromecast offers an alternative to view media content on your phone on the TV to the primary locked-in functionality used by Apple to capture Apple TV sales from the iOS device user base.

While HBO Now will be available exclusively on Apple TV at launch, users with desktop/laptop computers and other iOS devices can also access the service. IHS says this will be short-term boost for Apple TV.

The firm contends that for Apple to create and sustain market advantage, it will need to expand the overall capabilities of Apple TV, expand the selection of content partners, and release updated hardware.

“In terms of scale over the long-run, however, Apple’s hard ties between Apple TV and iOS devices will still continue to cap Apple TV’s total available market in the face of Google’s multi-platform, multi-company, multi-device attack on the streaming audio and video market,” IHS said in a note.