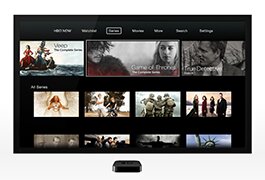 Apple cuts 30% off price of streaming device to $69

HBO March 9 confirmed reports it plans to launch an over-the-top video service — HBO Now — in April through Apple TV priced at $14.99 a month. The much anticipated subscription streaming service will be operational in time for the fifth season of “Game of Thrones.”

HBO Now will also be available on PCs (and a TV through an HDMI connection) — but not other streaming devices such as Roku, Google Chromecast or Amazon Fire TV. Apple TV's exclusive access runs for 90 days after launch. Financial terms of the partnership were not disclosed.

HBO Now, along with Dish Network’s Sling TV, could be game changers in that they offer vaunted channels such as HBO, ESPN and AMC Networks — heretofore benchmarks of the traditional bundled pay-TV ecosystem.

HBO Now is also a new threat to Netflix, Amazon Prime Instant Video and Hulu Plus. To subscribe to HBO Now only requires a broadband connection. Indeed, Netflix shares slipped 2.5% in midday trading.

Notable to the launch is that users can subscribe using the HBO Now app on their iPhone, iPad or iPod touch, or directly on Apple TV. Upon registering, subscribers will also be able to watch at HBONow.com. HBO will offer a 30-day introductory free trial period to new HBO Now customers who sign up through Apple in April.

HBO said it continues to be in discussions with its existing multichannel video program distributors and new digital partners to offer HBO Now. At launch, HBO Now will also be available on iOS devices. Apple TV, which has a three-month exclusive to HBO Now for its devices, reportedly has a user-base of 25 million, according to The NPD Group.

HBO envisions the OTT video service addressing a market of 10 million consumers that only subscribe to broadband. To the Time Warner subsidiary, that markets represents upwards of $150 million in incremental revenue opportunity.

“HBO Now is the next phase of innovation at HBO,” Richard Plepler, CEO of HBO, said in a statement. “With this new partnership, a natural evolution for the network, we have access to millions of Apple customers who are used to getting their favorite apps immediately. Now, they can do the same with an HBO subscription.”

Similarly to HBO Go, HBO’s TV Everywhere app for authenticated viewers, HBO Now will offer more than 2,000 titles online. This includes current critically acclaimed series such as “Game of Thrones,” “True Detective,” “Silicon Valley,” “Girls,” “Veep” and “The Leftovers,” as well as classics such as “The Sopranos,” “Sex and the City,” “True Blood,” “The Wire” and “Deadwood.”

In addition, HBO Now will showcase “Last Week Tonight with John Oliver;” “VICE,” hosted by Shane Smith; HBO Sports documentaries, series and world championship boxing events; and documentary programming such as Going Clear: Scientology and the Prison of Belief, The Jinx: The Life and Deaths of Robert Durst and the Oscar-winning Citizenfour.

“With the same simplicity as buying an app, customers can subscribe to HBO Now and instantly start viewing their favorite HBO programs as they air — this is huge,” Eddie Cue, Apple’s SVP of Internet software and services, said in a statement.