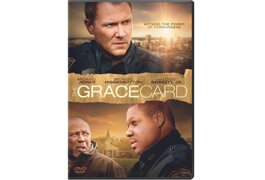 Whether you’d like to admit it, we’re all in need of forgiveness. The Grace Card from Sony Pictures Home Entertainment uses the story of two very different policemen to paint a poignant picture of that simple truth.

In the faith-based film, the well-respected Sam Wright (Michael Higgenbottom) gets promoted to a sergeant in the Memphis Police Department, much to the disappointment of fellow officer Bill “Mac” McDonald (Michael Joiner), who has been on the force longer.

Also fueling his animosity is an underlying race issue. Mac’s toddler son was killed some 17 years prior in the aftermath of a police chase involving an African-American drug dealer. It’s the impetus for Mac becoming a cop, but the tragic incident also has led to him having prejudice toward blacks. Sam, who also pastors a local church, is African-American, and tries to make the best out of their situation, when they are paired together for patrols.

Both Sam and Mac have struggles in their home lives, as the former is estranged from his father and the latter is at his wits’ end being the sole provider for the household (his wife suffered a workplace injury) and raising an unmotivated teen son, Blake (Rob Erickson), headed down the wrong path.

In a shocking turn of events, Mac, responding to a call with Sam, accidentally shoots his son as the boy attempts a robbery. This terrible mishap causes more strife between Mac and his wife, as their son’s life is jeopardized. Blake needs a kidney transplant immediately, and the chances of him finding one are slim.

What happens next is a testament to the power of God’s grace.

Sam knew that being partnered with Mac, an unbeliever who was contentious at every turn, was a test from God. While he could have easily just held a grudge against Mac for the way he previously treated him, Sam instead showed his colleague love and compassion, and then went an extra mile to give a kidney to Mac’s son. Basically, he showed grace.

After his surgery, Sam goes on to tell his congregation about the “Grace Card,” a heartfelt pledge that he passed along to Mac. It reads: "I promise to pray for you every day, ask your forgiveness, grant you the same and be your friend always." In turn, Mac offers the “Grace Card” to the most unexpected person who actually needs it the most.

Sam’s selflessness reminds me of what Paul says in Acts 20:24: “I consider my life worth nothing to me, if only I may finish the race and complete the task the Lord Jesus has given me — the task of testifying to the gospel of God’s grace.”

The Grace Card ends with this great reminder from Ephesians 2:8: “For it is by grace you have been saved …” The film — definitely a tear-jerker, in a good way — hit home in a manner that made me reflect on my own life and reaffirmed how much more compassionate we should be toward those around us. After all, people have shown such kindness to me when I didn’t deserve it. I think it’s a feeling to which we all can relate.