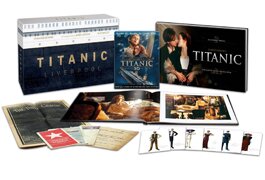 Amazon.com doesn’t offer as many exclusives as its brick-and-mortar competitors. However, the online retailer is stepping things up with Titanic, offering a boxed set that includes the 3D Blu-ray, a collector’s book, costume sketches and other collectibles. It’s listed with a $99.99 SRP but offered at $74.99.

Target offered a choice of three exclusive covers with the Snow White and the Huntsman Blu-ray, as well as a collector’s book with the film. And fans of “Castle” could get a $10 Target gift card with any season on DVD and the new Frozen Heat hardcover.

Best Buy, on the other hand, went coupon-happy. Shoppers could get a $5 Titanic coupon at TitanicMovie.com/BestBuy, as well as a $10 coupon for Castle: Season 4 or Private Practice: Season 5 at ABCTVonDVDCoupon.com/BestBuy.

Walmart offers a plush dog packed onto the new Barbie: The Princess and the Popstar ($14.96) as well as the exclusive DVD and Blu-ray of Big Top Scooby-Doo.