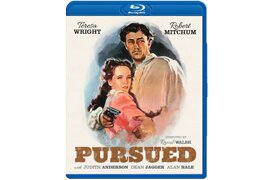 Olive, Western, $19.95 DVD, $29.95 Blu-ray, NR.
Stars Teresa Wright, Robert Mitchum, Judith Anderson, Dean Jagger.
1947. Pursued has a reputation as one of the better movies directed by longtime Hollywood vet Raoul Walsh. The emotions in Walsh’s oft-termed “noir Western” are dominant enough but have been forced under the surface. As witness to horrific events involving his family that he immediately represses, young Jeb (to be played as an adult by Robert Mitchum) is whisked away and adopted by a female stranger. To a great deal the movie works for me because Teresa Wright (top-billed) and Mitchum make an imposing couple — not merely on screen but even in the ad art.
Read the Full Review

Criterion, Drama, $29.95 DVD, $39.95 Blu-ray, NR.
Stars Glenn Tryon, Barbara Kent.
1928. Paul Fejos’ film about the affair of a punch press operator (Glenn Tryon) and a switchboard operator (Barbara Kent) will undoubtedly end up being regarded as one of the home entertainment events of the year.
Extras: The disc includes two Fejos features from 1929: the silent The Last Performance and the mob-backdropped musical talkie Broadway.
Read the Full Review

Having a Wild Weekend (DVD Review)

Available via WBshop.com’s Warner Archive
Warner, Comedy, $17.95 DVD-R, NR.
Stars Lanny Davidson, Dave Clark, Barbara Ferris.
1965. The first feature of cult director John Boorman was released in home-based England as Catch Us If You Can — the same title as a major hit recorded by its featured stars The Dave Clark Five.
Read the Full Review