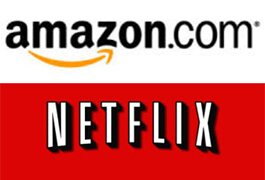 One spat started with a warning that Verizon consumers allegedly got while trying to stream Netflix video: “The Verizon network is crowded right now. Adjusting video for easier playback.”

Another came to light when an anime fan, who couldn’t preorder disc titles on Amazon, complained online to supplier Viz Media and got this response: “Our products are distributed by Warner Brothers, and currently they’re in contract negotiations with Amazon. Preorders are disabled while that goes on, but we’re hoping it will be resolved soon.”

Netflix and Amazon, twin online Goliaths of the home entertainment business, are using their enormous customer bases to put the squeeze on companies that supply them with bandwidth and product.

In the middle are consumers, who have so far benefitted from the low prices provided by Amazon and Netflix — some say gained unfairly by pushing the costs of doing business onto other companies. While consumers who bought items from Walmart, the top brick-and-mortar disc retailer, had to pay state sales taxes, consumers buying from Amazon were exempted from those taxes for much of its life as a company. That, many belief, allowed Amazon to offer lower prices and build itself into a behemoth that controls a good part of the retail business that chains such as Walmart used to dominate. Netflix used infrastructure built by Verizon and other companies to deliver streaming to its customers without paying for the online streaming company’s — some say — outsized domination of that bandwidth.

Netflix and Amazon will contend that they are merely part of a long line of disruptive technologies that change the world for the better. Those on the losing side of this change say they are freeloaders or monopolists that exploit unfair competition.

While some of these issues may end up before government agencies, legislatures or in court (Verizon sent a cease-and-desist letter to Netflix, for instance), these new online behemoths are quietly trying to gain an advantage in the court of public opinion — by upsetting their customers. It may be a risky strategy.