The Disconnect With Connected Entertainment 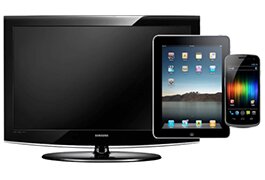 This holiday season both of my kids got tablets. They are pretty much out of the toy stage.

Their wish lists were full of electronic devices, even though we already had two computers, a laptop, a Chromebook, various iPods and four cell phones.

Instead they gave new meaning to the term second screen. They watched content and played games on their tablets while texting on the phone and playing games and chatting on the iPod.

When the television was on, they achieved what I would term “third screen.”

In the first two days after receiving the tablet my teenager said she had already watched five movies via our UltraViolet account. My 11-year-old had discovered various games to play and had shared her discoveries with friends via wireless on the iPod.

I couldn’t help but think of that as I scrolled through news of studio and other on-demand content flowing to new devices and perused all of the gadgets at the Consumer Electronics Show.

During a panel on the future of entertainment, Paul Berry, founder and CEO of Rebel Mouse, noted that in his family, group viewing is rare.

“Each of us has our own device, and we plug in our headphones,” he said.

Boy, did that sound familiar.

With digital content growing exponentially, and the number and types of screens to watch it in the home and on the go also soaring, communal viewing is becoming ever more rare.

The variety is just too tempting. When each family member can find something they want to watch online at any time, family movie night is no longer a group activity.

Still, there were occasions over the holidays when we all sat down to view a Blu-ray Disc together, often prompted by the kids, who seemed to crave that communal viewing experience common during the holidays of my childhood.

I guess even the most connected kids occasionally yearn to connect outside the digital world.