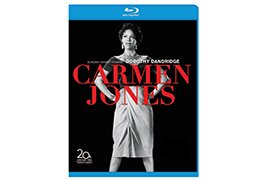 Fox, Musical, $24.99 Blu-ray, NR.
Stars Dorothy Dandridge, Harry Belafonte, Pearl Bailey, Diahann Carroll.
1954. Carmen Jones was something else: color, CinemaScope (at almost exactly the one-year anniversary of the form’s introduction), Bizet melodies, Oscar Hammerstein lyrics and a sexy cast headed by a tragic actress who might have been as big a star as anyone had she come along a decade or two later. Carmen was director Otto Preminger’s first widescreen movie, and he displayed a natural affinity with the form. Visually (including lead Dorothy Dandridge’s costuming) the movie rocks. The story’s early and then later sections are a showcase for some of the more ubiquitous African-American character actors of the period.
Read the Full Review

Available via Warner Archive
Warner, Musical, $19.95 Blu-ray, NR.
Stars Doris Day, Stephen Boyd, Jimmy Durante, Martha Raye.
1962. MGM’s Christmas release from half-a-century ago paired Doris Day at the end-side peak of her career opposite a score of Rodgers and Hart standards. Instead, it only cornered the limited market for Stephen Boyd musicals — though, truth to tell, one of the least dynamic movie leads of the era is passably OK here and not really the problem with a costly miss that has enough compensations to make me welcome its Blu-ray release. These would be the tunes (which include perennial heart-melters “My Romance” and “Little Girl Blue”), the chance to see co-stars Jimmy Durante and Martha Raye cavorting in something pretty close to career twilight and, of course, Day herself. As it stands, this was Day’s last musical, and hearing her sing a couple of the perennials is worth it.
Read the Full Review