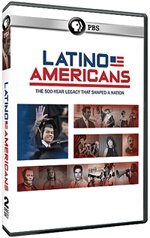 It’s about time a series like Latino Americans was made.

At more than 53 million people, we — Latinos — are the largest minority group in the United States, according to the U.S. Census.

Latino Americans is the first major documentary to tell the stories and history of our people in this country.

If you didn’t catch it when it aired on TV, PBS has you covered with it’s two-DVD set, available for $34.99, or online to stream on their .

Narrated by Benjamin Bratt (love him!), the six-episode documentary series goes all the way back to Latinos in the United States from the 1500s to today. That’s right, it goes back to when areas like California and Texas were actually part of Mexico.

It also sheds light on the various waves of immigrants from Mexico, Cuba, Puerto Rico, the Dominican Republic and El Salvador, and how U.S. policy is responsible for many of the laws and programs that brought Latinos here. These sorts of stories put into context the current events of today — and also might enrage you, if you look at the big picture. That is, brown people haters, if you only knew your history, you might see how foolish and contradictory your xenophobic and racist ways are.

But on a positive note, not only was it inspiring to see all these intelligent, successful, prominent Latino historians, professors, authors and many others tell our history, but it was impressive to learn that most of the production team behind the documentary are Latino Americans too.

During these six hours of viewing of this program, I felt an unprecedented sense of understanding and clarity on our history. I better understood our role, our struggles and our influence in this country. And I felt proud of both my Mexican culture and my American nationality.

But I also felt sadness and anger about the injustices and violence our people have endured over the years. It was heartbreaking to see the stories of racism against and lynching of not only innocent Latino American citizens but also against brave, decorated U.S. war heroes of Latino descent.

It also dismays me to think that many of these stories that are significant to U.S. history are not taught in our children’s classes, but hopefully programming such as this will help open people’s eyes.

PBS has started the dialogue, and they hope to keep it going. Visit their to submit your own videos and share what being Latino means to you.

Read a little more about the Latino Americans in my review.