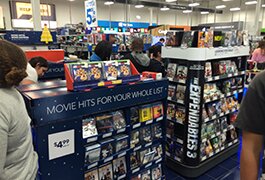 The consumer electronics retailer in recent years has downsized shelf space for packaged media, including movies and music, in favor of driving consumer traffic to its CinemaNow and Napster online subsidiaries.

Best Buy and Walmart, along with most major big-box retailers, again started Black Friday store sales on Thanksgiving evening, affording early-bird shoppers with special deals, promotions and in some instances, temporary paralysis. Black Friday sales forced Best Buy to halt online access for several hours to its website on Nov. 28 after the service was overrun by user traffic.

“A concentrated spike in mobile traffic triggered issues that led us to shut down BestBuy.com in order to take proactive measures to restore full performance. Our consumers can return to BestBuy.com in the next several hours to take advantage of today’s door busters,” Best Buy posted on its website.

On Thanksgiving evening, Walmart said more than 22 million customers visited its stores — a tally it claimed exceeds the number of people who visit Disneyland annually. To alleviate the anticipated consumer crush, Walmart gave out tickets for purchases to be picked up at the back of the store or on later store visit.

“In none of the Walmart’s I was in did I see the doorbuster TVs piled up for sale, it was tickets for purchase only. And it likely helped make the madhouse inside Walmart slightly better,” Stephen Baker, VP of industry analysis for The NPD Group, wrote in a Nov. 28 blog.

Best Buy did not issue tickets to early shoppers, which resulted in long lines waiting for cell phones.

“Finding some way to get consumers in and out of the store continues to be a physical retail challenge and one I believe represents the biggest threat that online retail represents to the in-store, in-person excitement of Black Friday,” Baker wrote.

”Last night was awesome! In a few short hours, we flipped from being the largest grocery store in town to the best gift shop on the block,” Laura Phillips, SVP of merchandising for Walmart U.S., said in a statement.

Meanwhile, the Best Buy store in Oceanside, Calif., which opened at 5 p.m. on Thanksgiving Day, sold current Blu-ray titles Maleficent and How to Train Your Dragon 2 for $9.99 each, while recent catalog Blu-rays such as The Lego Movie, Django Unchained and The Dark Knight Rises were available for $3.99 each.

Retailers clearly staffed up to deal with the demands of the busiest shopping day of the year — demonstrating the power and value that retail brings to the shopping experience — especially to those consumers not well-versed in the nuances of video games, according to Liam Callahan, director of the games industry for The NPD Group.

“This is the value that retail needs to continue to reinforce to consumers as digital options become increasingly attractive,” Callahan wrote. “My biggest observation is that retail is a key part of the holiday video game shopping experience as store employees educate and assist consumers, helping them make those important holiday purchases.”

Blu-ray on Black Friday: 'Love the One You're With'