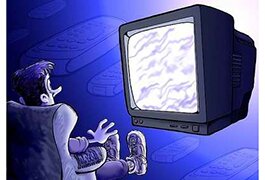 Subscription streaming and online video may get all the headlines, but traditional television watching continues to consume most American’s home entertainment time.

Americans watched an average of 155 hours and 32 minutes of broadcast television a month in the fourth quarter of 2013 — down about 52 minutes a month for the same period in 2012, according to new from Nielsen.

The decline is immaterial considering viewers averaged 14 hours and 40 minutes of “time-shifted TV” content in Q4 compared with 12 hours and 38 minutes during the same period in 2012.

When factoring the 2 hours and 2 minutes difference, Americans continue to watch a record amount of broadcast TV.

“The more things change, the more they stay the same, or so the saying goes,” Dounia Turrill, SVP of Insights for Nielsen, wrote in the study. “From the Super Bowl to the Olympics, we’ve seen the draw of live and special event programming. But we’ve also seen popular dramas return to the screen with record numbers showing that scripted television does draw audiences.”