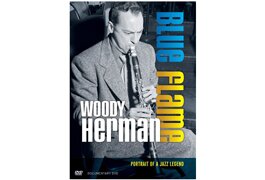 I became a Woody Herman fan early on in during a smattering of pre-Elvis formative years, thanks to my Aunt Carol’s scratchy old 78 of the Decca At the Woodchopper’s Ball classic, which she gave to me. She knew that I had my mother’s once-pricey World War II vintage portable 78 player in my bedroom by the time kindergarten rolled around, which enabled me to “know” ’30s and ’40s Big Band (well, a little) by the time first grade commenced and with rock-and-roll still a couple years off.

I never made a study of it, but it seems to me that there was never a time when Herman’s brass failed to cook — from 1939’s Ball, through the end-of-war Columbia Records period when “Caldonia” and the ballad “Laura” made Herman a Billboard chart factor, through the be-bop flirtation, ’50s TV appearances (which were many) and the ’70s period when he employed a lot of really young musicians while embracing rock. It extended beyond that, too, right through the end — when a deathless zeal to be on the road and probably financial necessity kept Herman active in buses and airports.

I haven’t seen Jazzed Media owner Graham Carter’s documentaries on Phil Woods and Bud Shank, but his new Herman portrait (which runs about an hour/50) follows a template similar to the one utilized in his portrait of Stan Kenton, which came out last year. This means a functionally shot but deep array of interviews with former colleagues and jazz experts, punctuated by an array of clips (the ones here are extended and very, very good). Fringe benefits from these latter include the ability to chart the changes in Herman’s ultimately receding hairlines over the years; I never thought I’d ever see Herman with “high hair,” but in one clip, he has it. Another is to see how the production values improved on Ed Sullivan’s show starting in 1949 (when it would have been “Toast of the Town”) through the era when his Sunday night neo-vaudevillian fest went to color. Included in the Ed array is “Caldonia” as performed in 1963.

Critic/historian George T. Simon coined “Herman’s Herd” in 1939, and every Herman band became a “Herd” of some kind, including a “Thundering” one fairly late in the game. By most or all accounts, Herman was a player’s leader with, in fact, the manner of a coach. As long as you didn’t take the train off the track, he would give you the creative space to indulge yourself, and he had no reticence to hire “pricks” (a word that gets used here) or even drug users if they could play better than some sweeter soul who couldn’t. The list of players and arrangers who wailed through his various incarnations was a long one, indeed. He remained married to the same woman for decades (a stunner, from appearances), and he gave an annual benefit concert in behalf of his favorite nun in Catholic school.

In addition to the Sullivan footage, filmmaker Carter has unearthed prime-era Herman footage from Earl Carroll Vanities and Sensations of 1945 (a marquee title if there ever was one); both were Dennis O’Keefe vehicles from, respectively, Republic Pictures and United Artists. Mentioned, but not dwelled upon, is the Herman business manager with a yen for horseracing bets paid for with funds that were supposed to be withheld — one whose under-a-rock professional ethics got Herman into such permanent trouble with the IRS that he was only allowed to live in, but not own, his own house. I vaguely recall stories of Frank Sinatra having come to Herman’s aid during this period, but though there’s no mention if it here. Stories of IRS harassing of Sgt. (Alvin C.) York, Joe Louis and Abbott & Costello peppered my childhood reading and always left a bad taste in my mouth. At least these guys were predominantly and not calculating — and didn’t keep offshore accounts.

The documentary also makes a strong case for Herman as a vocalist. Like Johnny Mercer and Eric Clapton, he likely could have made it purely as a singer had he not had other talents that were formidably overriding.

New on Disc: 'The Rains of Ranchipur' and more …