New on Disc: 'The Rains of Ranchipur' and more … 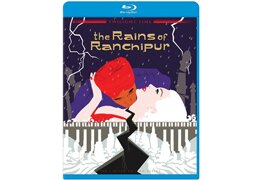 Available via www.ScreenArchives.com
Twilight Time, Drama, $29.95 Blu-ray, NR.
Stars Lana Turner, Richard Burton, Fred MacMurray, Michael Rennie.
1955. Even in a turban (or, if you wish, possibly because of it), Richard Burton makes such a formidably attractive co-star with Lana Turner here that one wishes that 1955 screens could have been a bit looser and that this Fox DeLuxe Color remake could have taken place somewhere a bit closer to an ‘NC-17’ Raunch-iper. Even so, the studio’s second go at novelist Louis Bromfield’s The Rains Came was suggestive and thus popular enough in its day (Turner’s “Lady Edwina” character has “been around,” as they used to say) to justify its year-end holiday release. Taking over roles from Myrna Loy and Tyrone Power in the 1939 Rains original, Turner and Burton are, respectively, a gossip-columnist delight and dedicated physician in India. The latter is not educated in “the ways of women” — having been adopted as the protégé of a practically palace-dwelling person of influence (Eugenie Leontovich) after being sired by “untouchables.” Michael Rennie plays Turner’s perpetually cuckolded husband (he at least gets to wear evening clothes a lot), and there’s a second romance (definitely a subplot) that slows down the narrative thrust. It’s between Fred MacMurray as a financially well-heeled juicehead who’s turned sour on the world and Joan Caulfield (by now “playing younger”) as a recent Iowa college grad who struggles to get him on track. Here, as in ’39, the rains are coming, and the dramatic payoff is still the huge earthquake and dam-bursting scene that creates a life-altering situation for all. The sequence earned a special effects Oscar nomination, and it’s still fairly impressive on Twilight Time’s CinemaScope rendering. Ranchipur was directed by Jean Negulesco, who (along with its cinematographer, Milton Krasner) had just been responsible for one of Fox’s Big Ones of the era: Three Coins in the Fountain.
Read the Full Review

Jazzed Media, Documentary, $18.99 DVD, NR.
2012. I never made a study of it, but it seems to me that there was never a time when Woody Herman’s brass failed to cook — from 1939’s At the Woodchopper’s Ball album, through the end-of-war Columbia Records period when “Caldonia” and the ballad “Laura” made Herman a Billboard chart factor, through the be-bop flirtation, ’50s TV appearances (which were many) and the ’70s period when he employed a lot of really young musicians while embracing rock. It extended beyond that, too, right through the end — when a deathless zeal to be on the road and probably financial necessity kept Herman active in buses and airports. This new Herman portrait (which runs about an hour and 50 minutes) follows a template using a functionally shot deep array of interviews with former colleagues and jazz experts, punctuated by an array of clips (the ones here are extended and very, very good). Fringe benefits from these latter include the ability to chart the changes in Herman’s ultimately receding hairlines throughout the years. Another is to see how the production values improved on Ed Sullivan’s show starting in 1949 (when it would have been “Toast of the Town”) through the era when his Sunday night neo-vaudevillian fest went to color. Included in the Ed array is “Caldonia” as performed in 1963. By most or all accounts, Herman was a player’s leader with, in fact, the manner of a coach. The list of players and arrangers who wailed through his various incarnations was a long one, indeed. The documentary also makes a strong case for Herman as a vocalist. Like Johnny Mercer and Eric Clapton, he likely could have made it purely as a singer had he not had other talents that were formidably overriding.
Read the Full Review