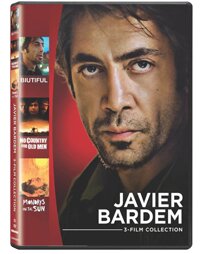 I was talking with my friend the other night about Skyfall, and he remarked that Javier Bardem was ‘exquisite’ in this latest Bond movie and that he ‘nearly stole the film.’ Then my friend paused and amended that and said he actually did steal the film.

Though I haven’t seen Skyfall yet (I’m dying to), it didn’t surprise me to hear this about Bardem. The Spanish actor is one of my favorites, and with rugged good looks and the acting chops to match, who doesn’t love him?

With relish, I recently took at look at the Javier Bardem 3-Film Collection, which Lionsgate released last week. The three-DVD set features No Country for Old Men, Biutiful and Mondays in the Sun and is priced at $19.98 — a steal, if you ask me.

Bardem deservedly won the Best Actor Oscar for his work in No Country for Old Men (2007), and he was nominated for the same award for Biutiful (2010) — two wonderful movies in which Bardem is as exquisite as ever.

Most have probably seen or at least heard of those two films, but maybe not Mondays in the Sun (2002). This Spanish film won five Goya Awards, one of which was awarded to Bardem for Best Actor. The heartbreaking drama is about five unemployed shipyard workers in Spain, led by Santa (Bardem), a lonely ladies’ man. Together they search for work, love and the strength to hope for better days, while bickering like brothers in the process. This one is worth checking out to see a fully bearded Bardem, in a not-unusual role of a down-on-his-luck guy who still manages to keep a sparkle in his eye.