Having a Wild Weekend (DVD Review) 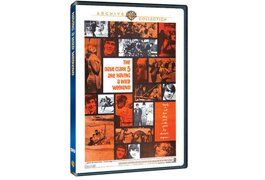 The first feature of a favored-by-me cult director, John Boorman’s HaWW was released in home-based England as Catch Us If You Can — the same title as a major hit recorded by it featured stars The Dave Clark Five (and for me it was their best recording). Why distributor Warner Bros. pulled a marquee switch for the U.S. release is a mystery to me, though I suppose it can be said that the revision is a little more descriptive of what happens on screen, even if what transpires isn’t necessarily wilder than anything in Cat Ballou, The Pawnbroker, The Great Race, The Hill or a lot of other movies that came out in ’65.

By this time, of course, it seemed as if everything this side of Jerry Lewis in The Family Jewels was beginning to go Mod, starting with Julie Christie’s same-year Oscar vehicle Darling, with all those miniskirts. Specifically, Weekend was a DC Five response to the Beatles/Richard Lester A Hard Days Night, which had come out the year before (July in Britain and August in the U.S.). Night had not only been a commercial success (expected) but a critical one as well (unexpected), and who can resist the promise of that potential combination when it comes to green-lighting a project? Yet by the time Weekend opened in America roundabouts August ’65 (the British release had been in April), it had to contend with the Beatles/Lester follow-up Help!, whose New York premiere had occurred only a week previously — all around the time Darling was going wide as well. The U.S. critical establishment must have been overwhelmed: even at a screening of Give My Regards to Broad Street a couple decades later, I once overheard a big-name critic ask an equally clueless colleague who Beatles producer George Martin was.

In my view, Weekend is only a Mod curio, though simply by being one of those it-is-what-it-is confections, this 91-minute toss-off captures a time and place without breaking much of a sweat, so you can see why viewer reactions differ so dramatically on IMDb.com. The big problem is that whereas the Beatles had personas so distinctive that some reviewers compared them to those of the Marx Brothers (even then a stretch), Clark — the only group member here who gets any distinctive kind of showcase — looks pretty lost on screen. And aside from the mix of DC5 recordings that get lathered over the soundtrack, Boorman doesn’t even seem to care about portraying the guys as a unit. Curiously, the non-Clark foursome — Lenny Davidson, Rick Huxley, Mike Smith and Denis West Payton — play a Lenny, Rick, Mike and Denis while Clark plays a “Steve.” All of these characters are stuntmen employed by a meat-packing company for its TV commercials, and all live in a playroom of a flat (if that is actually what it is) that even has its own indoor trampoline.

Star of these ads is a blonde named by Barbara Ferris, whose career never clicked but whose name may elicit warm memories from those who remember Michael Winner’s The Girl Getters and the Oskar Werner version of Interlude. Giving the hard-sell to “meat” may come off as strange today (when the hyped product would probably be some vegan alternative), and the ad agency guys who are the Brit equivalent of the “Mad Men” crew spend some time debating whether the commercials are effective. And, if not, which culprits are undermining their potency. Nobody seems very happy — there’s a melancholic undertone throughout that’s kind of interesting — and the gang takes off by car on a strange and unauthorized odyssey where they meet (for want of a better characterization) some pre-hippie types and, eventually, a wealthy but bickering middle-aged couple who turn out to be friendlier than they first seem. It all ends up at a costume party that’s heavy on a Harpo Marx motif, which means this is either a movie you’ll either you’ll want to see or you won’t.

One reason to see it, of course, is Boorman’s participation. And it is curious that on at least the partial basis of this, someone (apparently, it was Lee Marvin) determined that he would then be the right person to direct the near-classic mob revenge pic Point Blank (and many would eliminate the “near”), which was one of the most brutal films of its brutal day (I remember that Richard Schickel in Life magazine was not happy). Boorman went on to have an intriguing career of profound ups (Deliverance) and profound downs (Exorcist II: The Heretic) as well as a slew of items that were either widely praised or became cult items: Hell in the Pacific; Leo the Last; Excalibur; The Emerald Forest; Oscar-nominated Hope and Glory; Where the Heart Is (oh, yes it does too have a cult); The General; the sublime Lee Marvin: A Personal Portrait by John Boorman and even The Tailor of Panama. I’m still not quite sure how Dave and the gang fit into all this, but it’s one of those things that give movie history its fascinations. Meanwhile, Clark became a mogul (he bought the endlessly rich Ready Steady Go! broadcast library — wow!) before the Five belatedly but finally made it in to the Rock and Roll Hall of Fame after having made what seemed like as many appearances on “The Ed Sullivan Show” as Topo Gigio and Alan King put together.