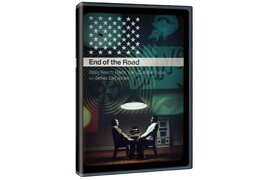 End of the Road

Warner, Drama, $19.97 DVD, ‘R.’
Stars Stacy Keach, James Earl Jones, Harris Yulin, Dorothy Tristan.
1970. The late Aram Avakian’s provocative mess (though possibly a calculated one) of John Barth’s novel has gone all but unseen since its tentative release early in 1970, when it became another of those occasional films featuring real actors to receive an ‘X’ rating. Unlike others in the club that have come to seem relatively tame with the passage of time, Road even now falls into the ‘hard R’ category.
Extras: The DVD’s accompanying documentary was directed by Steven Soderbergh.
Read the Full Review

Universal, Comedy, $14.98 DVD, $26.98 Blu-ray, NR.
Stars Bud Abbott, Lou Costello, Lon Chaney Jr., Bela Lugosi, Glenn Strange.
1948. Universal’s horror legacy is treated with the utmost respect one would hope for in a send-up that does justice to both halves of the cast. Many consider this Abbott and Costello’s best film. Universal has done a very nice job on the Blu-ray (sharp imagery is a key plus when it comes to shadowy horror).
Read the Full Review