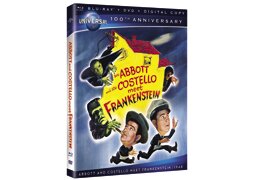 By 1948, the Universal horror cycle that made superstars out of Frankenstein, Dracula and the Wolf Man was exhausted, and it would be six more years before that Creature from the Black Lagoon (aka “The Gill Man”) would be trying to remove Julie Adams’ one-piece bathing suit for God-Knows-What kind of mayhem (though having seen Humanoids from the Deep, I have a general idea). Thus, you can’t say that the studio (by now, Universal-International) was putting too many eggs in a basket and concentrating too many big guns in a single picture.

Leonard Maltin, Danny Peary and a host of others consider the result to be Abbott and Costello’s best picture, and to be sure, Universal’s horror legacy is treated with the utmost respect one would hope for in a send-up that does justice to both halves of the cast. But the result is still on the high side of mild, and the sourpuss in me frankly gets more punch out of The Naked City and Another Part of the Forest and All My Sons (all U-I releases from the same year), which is not to say I’d ever go to the mat proclaiming all of them better pictures.

The other thing: When I was a kid, Abbott and Costello always kind of depressed me, and by age 7 I’d picked up on the fact that they lacked the cutthroat sexual tension that Martin & Lewis had in Living It Up and You’re Never Too Young, movies in which they competed for, respectively, Janet Leigh and Diana Lynn. Years later, interviewing Jerry Lewis, I noted this about A&C, and he replied, “Nobody wanted to f*** ‘em.” There was also Bud Abbott’s overall lack of color compared to Dino’s status as the greatest straight-man who ever lived (including to certain women performers); the fact that Abbott slapped his partner around in what I regarded as over-the-line cruelty; and the fact that (on TV’s “The Colgate Comedy Hour,” at least), Costello sweated a lot and looked ill even before he suffered the heart attack that came before the 1959 fatal one — the prelim that knocked the team off the “CCH” for quite a long stretch in roundabouts 1954. On the other hand, their filmed and syndicated half-hour comedy series around the same time was still holds up exceptionally well (I have the box set with all of them), and there’s no question that Abbott’s timing on the impeccable “Who’s on First?” routine (as funny the 500th time you hear it as on the first) is equally responsible for that instant classic’s success.

In addition to a title that contended for its screen decade’s truth-in-advertising award, this premise of this comic-horror hybrid (generally regarded as the best entry in a sorry genre) is also easy to digest: Dracula (played by Bela Lugosi himself) wants to transplant Costello’s brain into the skull of Frankenstein (the monster, that is, and not the same-name doc who let things get out of hand). The creature is played here by Glenn Strange — what a great name for a horror actor — and the fact that Jane Randolph plays one of women in the cast makes for a good Cat People cross-reference. Lon Chaney Jr. is back as sad-sack Wolf Man Lawrence Talbot — sweating out full moons but at least trying to offer some help, though you do wonder if Chaney was thinking, “Look, I played Lenny for Lewis Milestone and Aaron Copland in Of Mice and Men, so do I still have to play in these things?” I’m also curious about what kind of pay cut Lugosi had to take to play the same role for the same studio as he had a decade before — only this time, in a much smaller role. Pretty soon, he’d be on the way to the Valley of Ed Wood and serving as foil to Duke Mitchell and Sammy Petrillo in Bela Lugosi Meets a Brooklyn Gorilla (which got the ’50s T-i-A award).

Costello has some funny lines here, including the great one about kissing a woman who’d had so much bridgework that he had to pay a toll (a zinger he recycled on a really bad 1952 “Colgate” show I just watched — the one with Charles Laughton — where you can see the degree which both partners (by now, Abbott had a mustache) had aged in four years. Universal has done a very nice job on the Blu-ray (sharp imagery is a key plus when it comes to shadowy horror), just as I had heard about on the earlier Buck Privates Blu-ray that I have but have not yet viewed. Two A&C’s in the 100th Anniversary celebration seems a tad steep, though. I’m still waiting for, in some form but preferably hi-def, a Scope rendition of Douglas Sirk’s A Time To Love and a Time To Die.