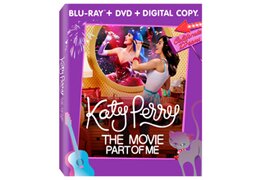 The new 3D concert movie Katy Perry: Part of Me inspired the most exclusives among the Sept. 18 new releases.

Walmart offered a limited number of the non-3D Blu-ray/DVD combo pack with a bonus postcard autographed by Katy Perry that is suitable for framing or usable as the Blu-ray packaging cover. Walmart.com listed the exclusive at $19.96, marked down from a $44.99 list price.

At Target, copies of the Part of Me non-3D BD combo pack came with 20 minutes of additional bonus content and exclusive box art.

Another exclusive offered at Target were a packet of five lithographs with the new Indiana Jones: The Complete Adventures Blu-ray (offered at $69.99).

Target also offered an instant $8 savings when Beverly Hills Chihuahua 3 was purchased with either of the first two films.

Best Buy offered more coupons for discounts on new Disney discs, with $5 off the Beverly Hills Chihuahua 3 Blu-ray at , and $10 off Body of Proof: Season Two or Army Wives: Season 6 Part 1 at .