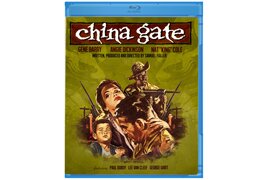 Olive, Drama, $24.95 DVD, $29.95 Blu-ray, NR.
Stars Gene Barry, Angie Dickinson, Nat King Cole, Lee Van Cleef.
1957. Casting Angie Dickinson as a Eurasian saloon keeper named Lucky Legs — and then directing her to sit in semi-recline amid a CinemaScope frame — was inspired even by Samuel Fuller standards. Filmed during a kind of heyday for Fuller when the producer-director-writer found 20th Century Fox to be a harmonious playground, China Gate will pass as the first Hollywood movie about what became the Vietnam quagmire until someone can name me an earlier title of equal weight. At this point, America was simply advising the French, though the protagonists here are a ragtag collection directly from the soldiers-of-fortune playbook, even if the casting of Nat King Cole as one of them — and make that a singing Nat King Cole — threatens on paper to make the picture go a little gonzo.
In addition to having delivered booze to the Commies and, thus, developing a sense of local geography, Ms. Legs is additionally a good choice to have been recruited for the mission because the North Vietnamese major whose fortress the band is trying to crack has a yen for her. So does the Gene Barry character, but here it gets complicated. The two have a little history (read: a 5-year-old son), though dad bailed out because the kid looks Asian and not like, say, Bat Masterson — the TV cowboy Barry would soon be playing on TV.
Gate probably wouldn’t have the cult rep it has today had it come out 10 years later in the Duke Wayne/Green Berets ’60s, but as a product of the auteurist ’50s, I suspect it has always spurred a “Let Sam Be Sam” attitude among those not sharing Fuller’s politics (not that they’ve ever been easy to pigeonhole). Olive’s print shows some wear in certain reels but exhibits visual depth most of the time. The major league music credit is unusual — Victor Young and Max Steiner — because Young, who was working himself to death in the mid-1950s, died at 57 during production — less than a month after his greatest triumph (Around the World in 80 Days) opened in New York before the composer could see the degree to which the Decca soundtrack LP caught on with the public.
Read the Full Review

Key to the City

Manufactured on demand via Warner Archive
Warner, Comedy, $18.95 DVD, NR.
Stars Clark Gable, Loretta Young, Frank Morgan, Raymond Burr.
1950. Known to fanciers of low-end trivia questions as the 1950 George Sidney movie that wasn’t the year’s biggest box office attraction (which was Annie Get Your Gun), this is one of those projects more interesting for the history and dynamics that occurred off screen than on it. A romantic farce that isn’t farcical enough, it casts Clark Gable and Loretta Young as, respectively, East and West Coast mayors who meet at a mayoral convention — with reserved Young falling for her counterpart’s masculine ways (former longshoreman that he is).
What makes this movie a little interesting around the edges is, first, the fact that third-billed Frank Morgan — Oz himself — died at 59 of a heart attack right after filming; according to the very first volume of Daniel Blum’s Screen World from 1949, it was two days. Though looking unambiguously elderly in his role as Gable’s fire chief, Morgan doesn’t seem at all infirm and, in fact, delivers a broad performance. The second point is even more intriguing: Gable and Young had conceived a child during the filming of 1935’s screen version of Jack London’s The Call of the Wild, a daughter whose real identity was somewhere between a secret and open secret after she was “adopted” from the Catholic orphanage in which Young had initially placed her. The late Judy Lewis’ memoir about her upbringing, Uncommon Knowledge, is one of the best show biz biographies I’ve ever read.
There must have been some compelling dynamics on the City set — more compelling, to be sure, than what this inoffensively mild comedy has to offer. As for Gable, he was from that era when guys in their late 40s often looked old, but for the day, and as much as one can discern through his shirt, the dude looks pretty ripped.
Read the Full Review