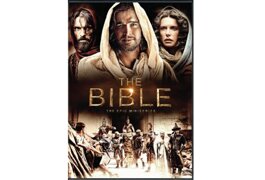 I was one of the 100 million people who viewed the 10-part, five-episode event that was The Bible: The Epic Miniseries. Religiously, I tuned in to the History Channel on Sunday nights in March, my eyes fixed on my TV screen, excited to see how exactly husband-and-wife team Mark Burnett’s and Roma Downey’s vision would come to life.

The series gives accounts of such notable biblical tales as Adam and Eve in the Garden of Eden, Noah and the ark, Moses and the burning bush, Abraham’s test of faith with Isaac, David slaying Goliath, the feeding of the 5,000, Jesus and Peter walking on water, Lazarus being raised from the dead, Jesus’ triumphant entry into Jerusalem on a donkey, and, ultimately, Jesus’ crucifixion, death, burial and resurrection culminating appropriately on Easter Sunday.

I, for one, would have liked to see the stories of Joseph and Jonah told for their inspiring and teachable moments that have resonated with me throughout the years, but overall The Bible is an exhaustive collection of the book’s greatest hits. I’m sure Burnett and Downey had a hard time trying to pin down which parts to highlight.

The couple addressed their challenges and even the controversy that blemished the series (some seeing a resemblance of Satan in President Barack Obama) during the “Oprah’s Next Chapter” interview that aired on OWN this past Sunday, accompanied by Diogo Morgado, the 33-year-old Portuguese actor who was given the role of a lifetime as Jesus Christ.

It’s not a surprise that Burnett and Downey, who identify as Christians, were met with skepticism when some of their colleagues in Hollywood heard of their daunting endeavor to tell The Bible. I’m just glad that they were able to stand on their faith and prove the naysayers wrong. In doing so, they have touched so many people.

Now that the series is out on Blu-ray Disc and DVD from 20th Century Fox Home Entertainment, I can’t help but think of all the places The Bible will go and all the other people it will reach, including some who have never read the Bible or don’t know about Jesus Christ. The series’ global impact is undeniable.

Personally, it made me think of these stories in new ways and, most importantly, made me want to dig in to the Bible for myself to see how their portrayal stacked up to the written word. The beauty of having it on disc is to catch some of the things we may have missed the first time around. Burnett and Downey alluded to a few thought-provoking parallels made in the series during the Oprah interview.

The Bible: The Epic Miniseries could very well be this generation’s The Ten Commandments. I guess only time will tell.