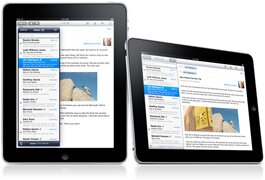 Data suggest owners of the iPad, Galaxy Tab, Xoom, G-Slate and other tablets are just as likely to stream movies as repurposed television shows

About 50% of consumers with the popular tablet mini-computer are streaming movies as well as TV shows, according to a new In-Stat report.

The Scottsdale, Ariz.-based research firm said the findings underscore the reality that tablets and smartphones steadily are usurping laptop computers for video consumption, in addition to functioning as personal interaction devices for social networking and third-party apps.

Indeed, media reports suggest a tablet sale supplants a laptop sale every 2.5 seconds. Last week HP briefly upstaged the iPad 2 juggernaut when it slashed the price of its poor-selling TouchPad tablet to $99, selling out its entire inventory in one day.

Amazon reportedly is readying two Android-based tablets aimed at undercutting Apple’s 80% market share in the burgeoning tablet space. In fact CNET earlier this year, in a review of tablets, recommended consumers not sign up for a manufacturer’s data plan until the “dust settled” regarding product availability, screens, resolution and features.

“By 2015, our research projects that 65% of the U.S. population will own a smartphone and/or tablet,” said Keith Nissen, research director with In-Stat. “As these devices become a center point for video engagement and consumption, content providers, device manufacturers and operators need to support a multi-screen usage model that reflects social interaction, screen interaction, personalization and mobility.”

More importantly Nielsen recently found that among 12,000 online interviews of tablet owners, just 3% of respondents used the device to access Netflix and 2% used it to access Hulu — underscoring the small footprint tablets currently have in the streaming realm.

Report: Tablets, Smartphones Owned by 65% of Americans in 2015