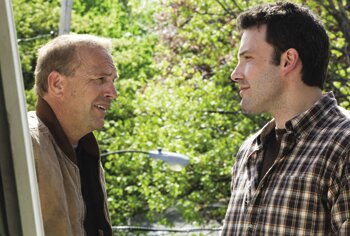 The idealized image of the American male includes working and providing for one’s family. John Wells’ The Company Men, releasing June 7 (prebook May 11) from Anchor Bay Entertainment, deal with what happens when that image is torn down due to corporate downsizing.

In the film, Ben Affleck plays a man who seems to have it all — a great job and loving family. But when his company lets him and several others go (including co-stars Chris Cooper and Tommy Lee Jones), the men must reevaluate what it means to be a provider for one’s family.

“It shows what it means to be a father and what men can mean to their families,” Wells said.

In the film, Affleck’s character then goes to work for his brother-in-law (Kevin Costner), installing drywall. Wells said his real-life brother-in-law lost his job and went through many of the emotions portrayed in the film, helping to inspire Wells to research and find similar stories, which inform several of the plot points of Company Men. Wells said he could relate inasmuch as being a freelancer working week to week.

“This is the first period of time in my adult life that millions of white-collar workers who’ve done everything they were supposed to do are feeling what a lot of blue collar workers have been feeling for 15 or 20 years now, which is insecurities in the marketplace,” Wells said. “I feel that all the time because I'm only as good and employable as the last thing I did.”

Wells shouldn’t have to worry much these days, having served as executive producer on such shows as “The West Wing.” He’s had the critical success of Company Men (74% on ), which was his film directorial debut; and now he’s working on Showtime’s “Shameless,” as writer and executive producer. The latter show also deals with family and father issues, as drunk Frank Gallagher (William H. Macy) avoids taking care of his six children. Wells says he likes exploring stories about fatherhood, about how and why people take care of one another and how communities form around those in need.

“One of the things people told me over and over again [in researching stories for The Company Men] was that people came around them to support them even when they didn't think they had a community,” Wells said. “One hundred and fifty years ago we were dependent on community. We’ve moved a bit away from that, but the reality is as things change, that’s exactly what we need to return to.”

The Company Men DVD ($29.98) and Blu-ray ($39.99) discs include a commentary with Wells, a making-of featurette and deleted scenes Wells said were taken out from the version that aired at the Sundance Film Festival.