Deals Going to the Dogs 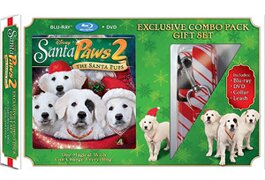 While the impending Thanksgiving holiday and Black Friday sales dampened the impact of the Nov. 20 new releases, a few retailers still found ways to promote them.

For example, Best Buy offered a $5-off coupon for Disney’s Santa Paws 2: The Santa Pups Blu-ray (), offered at $22.99 without the discount.

Best Buy also offers a $5 coupon for the Dec. 4 release of The Dark Knight Rises with the purchase of steelbook Blu-rays of Batman Begins or The Dark Knight at $9.99 each.

Disney’s Cinderella: Diamond Edition finally arrived in a DVD-only configuration, but Best Buy offered it at $16.99, the same price it offered the Blu-ray/DVD combo pack of Cinderella.

Walmart offered the Santa Pups Blu-ray/DVD combo pack in a gift set with a dog collar and leash.