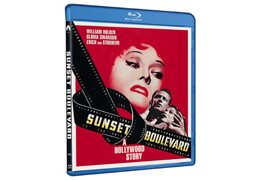 Paramount, Drama, $26.99 Blu-ray.
Stars Gloria Swanson, William Holden, Nancy Olson, Erich von Stroheim.
1950. Billy Wilder’s final collaboration with his then producer/co-writer Charles Brackett already was regarded as a legend a mere handful of years after its release — a film then spoken of in the reverent tones reserved for classic silents that were famous but almost impossible to see outside of New York (if then). Sunset Blvd. may be the greatest movie about Hollywood ever made, but it is also film noir (a potent combo of cross-genres if there ever was one). And a new Blu-ray where the print that has just enjoyed some serious “work” (which plot-central Norma Desmond likely would have had as well) is beyond welcome. The cinematographer was Paramount’s great John F. Seitz, who also shot Double Indemnity and The Lost Weekend for Wilder and one who must have been the on-demand choice of significant Paramount money-maker Alan Ladd, who later employed Seitz on the films the by-then fading DP later did at Warner Bros. But it is, of course, the movie’s originality, audacity and imaginative casting that still makes it work. First of all, Brackett-Wilder’s cheeky achievement is still a brutally honest portrait of Hollywood. Then, we get the gonzo casting gifts that Wilder always had: Gloria Swanson, William Holden, Nancy Olson, Buster Keaton and (my favorite) Erich von Stroheim and Jack Webb — to say nothing of Cecil B. DeMille playing himself. Plus, an Oscar-winning score by Franz Waxman. Despite giving Swanson the role of a lifetime (notwithstanding her many silent triumphs), the long-term legacy of Sunset Blvd. was to rescue Holden from a litany of indifferent roles at Paramount and Columbia post-World War II and launching him into superstardom.
Extras: This lovely release imports a ton of extras from a previous deluxe standard Blvd. DVD, adding a musical number about studios and producers of the day that Wilder excised and replaced because it was too inside-baseball for the general audiences who did make the picture a hit — not a monster one but definitely a box office success from a time when general audiences (there was only a barely specialized “niche” demographic) were a lot sharper than they are today.
Read the Full Review

Available via WBshop.com’s Warner Archive
Warner, Drama, $18.95 DVD, NR.
Stars Wallace Beery, Jean Harlow, Clark Gable, John Mack Brown.
1931. Clark Gable only gets seventh billing in this MGM bootlegging melodrama with an enticingly curious cast and equally no-slouch background credits — a movie that headlines Wallace Beery as a double-crossed lug who becomes a Prohibition powerhouse in town (for a while). Gable wasn’t yet a star but could have lived like one had the studio been paying him by the hour. Gable quickly got a rep as one who wouldn’t kowtow on screen to high-strung women (Now see here, Scarlett) and might even push them around. But here, he’s simply a big-city reporter in a friendly rivalry with a competitor for the affections of a “friend of the gang” played by Jean Harlow — who was coming off Howard Hughes’ Hell’s Angels and about five days away from making a second splash with James Cagney in The Public Enemy. Produced by William Randolph Hearst’s Cosmopolitan Pictures, Six was not exactly shy about promoting vigilantism. And by the way, the vigilante Six are a hoot to see in the movie — vigilantes in eye masks that wouldn’t disguise anybody very much if someone had to identify them during a trial. Six was a major league production — one that also employs the amusing casting of Lewis Stone as a low-key mob lawyer who’s a brain of the outfit.
Read the Full Review