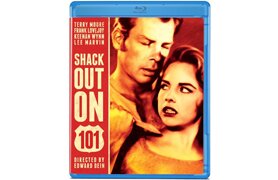 A Communist-conspiracy spy drama (or spy comedy, who knows?) set in a Pacific highway ptomaine-tempting eatery, this is one unique folly even if “unique” is a word that’s always tossed around carelessly (in movie criticism and in life). I first heard about this jaw-dropper in college, from my boss in a CBS affiliate’s promotion department, who spoke of it in utter disbelief. A decade or more later, I read of it in one of the Guilty Pleasures features that Film Comment used to run — this one, pretty sure, guest-written by Larry Tucker, who was Paul Mazursky’s early co-writer on Bob & Carol & Ted & Alice and Alex in Wonderland. More utter disbelief. Then I programmed it in a double bill with Olsen & Johnson’s Hellazapoppin in Washington, D.C.’s old AFI Theater (then in the Kennedy Center) — and it became one of two movies I can recall in eight years that received a standing ovation from a packed house (F.W. Murnau’s silent Faust, with live organ accompaniment, was the other). Over the years, I have pushed it on friends, and comedy writer Bruce Vilanch tells me that he never recommends it to anyone himself without giving me credit. And my old work buddy Tom Gliatto, who has reviewed movies for People, says he has never been able to forget it since I put him onto it — much as he has tried.

People sometimes shorthand it that the entirety of Shack takes place on one minimalist restaurant set — though truth is, there’s also a back room where hot waitress Kotty (Terry Moore) lives, plus one or two more adjacent nooks and crannies. There’s also a memorable opening outdoor scene where Lee Marvin (as a cook named “Slob”) attempts to writhe all over Moore’s unwilling beach-lounging frame until she frees herself — whereupon he pulls her drying petticoat off a laundry line and rubs it in the sand. This — plus the fact that this buffoon carries a Slob moniker in the first place — pretty well establishes his character, though it does come as a surprise that he is, in reality, a Commie agent snapping photos of purloined nuclear secrets in one of the joint’s back rooms.

Thrown into all this are two more males with the Kotty-hots: Frank Lovejoy as a nuclear scientist (aha!) and Keenan Wynn as the joint’s proprietor (he perpetually engaging in repartee with Slob that is either mistimed or otherwise awkwardly delivered from the script’s printed page — if not improvised by two actors who, at least on the day of shooting, had lost their gifts of delivery). But it gets wilder. In one early scene, Marvin and one of his underground associates put the ends of a kitchen towel into their respective mouths and engage in a slugfest that seems to have its own very specific Marquis of Queensberry rules. Later, in a bit apropos of absolutely nothing, Marvin and Wynn walk into this minimalist establishment’s bar area and begin an exercise regimen — with weights. Moore/Kotty can rightfully ask the question: “Are there any normal guys here?”

Well, Lovejoy kind of is, in the agreeably dull kind of Lovejoy way, though for a while, his motives aren’t any less fuzzy than anything else here is throughout the story. Seeing Shack again after so many years, I’m more convinced than before that it’s supposed to be funny, though, on the other hand, there weren’t many films around in 1955 that openly satirized anti-Communist paranoia. Nor is scanning the credits of director Edward Dein, co-writing here with spouse Mildred, a whole lot of help — though Dein did also direct Colleen Gray in The Leech Woman, which suggests a sense of the outrageous on his part. Shack got a VHS release back in the day, but a 1.85:1 Blu-ray release from Olive is probably more than anyone could have ever predicted. Then again, when we ran it at the AFI, the booker somehow scored a 35mm print, which amazed us at the time. Photographically, this one’s from Floyd Crosby, father of rocker David, whose credits included High Noon, the Roger Corman-Vincent Price Poe pictures and Oscar-winning work for the Murnau-Flaherty Tabu early in his career. You do have to wonder if David and the boys ever threaded up a print and watched it under the influence of … well, anything would have done.