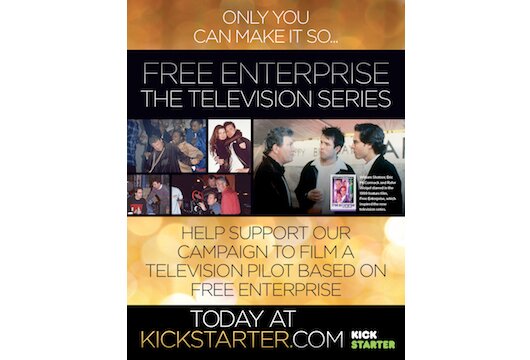 SAN DIEGO — The do-it-yourself spirit was alive and well at the 2014 San Diego Comic-Con International, and not just among the throngs of attendees dressed in homemade costumes. In the wake of the Kickstarter campaign that successfully greenlighted the Veronica Mars movie, several filmmakers took to this year’s event to tout supporting their own projects through the crowd-sourcing site.

The most prominent among them involves a television adaptation of the 1999 cult-hit comedy Free Enterprise, a love letter to “Star Trek” fandom and geek culture that celebrated its 15th anniversary with a panel at the convention. According to the film’s co-writers, Mark A. Altman and Robert Meyer Burnett, the show would retain the humor and pop culture references of the film, but with a new cast and new adventures.

The appeal of using Kickstarter is obvious to the show’s producers.

“This is a chance for us to make our show the way we want to make it,” said producer Burnett, who also directed the original movie. “We don’t have to answer to a studio or a network, only the fans who will make Kirk-starting this series possible.”

Burnett is also involved with another project funded through Kickstarter, the 20-minute fan film Star Trek: Prelude to Axanar, which held a premiere screening at Comic-Con on July 26. Burnett edited the film and hosted a Q&A with the creators and cast. Burnett said the film’s high production values, cinema-quality special effects and the involvement of actors from the canonical “Star Trek” series elevates Prelude to Axanar beyond the status of a mere fan film.

“This is a true independent ‘Star Trek’ film,” Burnett said. The film’s producers are now using Kickstarter to fund production of a feature-length version of Axanar, which tells the story of a war between the Klingons and Federation.

Another project gaining traction involves a documentary about the efforts to revive Superman on the big screen in the 1990s.

Producers of The Death of ‘Superman Lives’: What Happened? are hoping to raise $85,000 to finish the film, which tracks efforts to make a Superman film starting with Kevin Smith’s famous 1996 script, and including the involvement of director Tim Burton, who wanted Nicolas Cage to play the Man of Steel.

While much of the film’s early budget was raised on Kickstarter, producer-director Jon Schnepp seeks to raise post-production funding through FanBacked.com, and released a trailer comprised of already completed interview footage.

In addition, “Robotech” fans now have a chance to support the next chapter in the classic anime saga. The team at Harmony Gold Productions have taken to Kickstarter to raise $500,000 to complete Robotech Academy. So far they’ve brought in more than $180,000.

Chris Tribbey contributed to this report