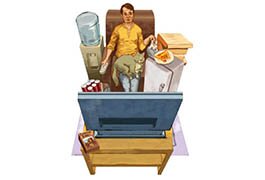 More than 80% of respondents in a new Harris Poll said they binge-watch multiple episodes of TV shows.

Binge-watching — popularized by Netflix during the first season of political drama “House of Cards” — is defined as those respondents who say they watch two or more TV episodes of the same show in one sitting.

The survey — conducted March 11 and March 17 in the United States on behalf of Comcast, included 2,020 adults nationwide and 200 in each of the top 10 media markets. Of those respondents, 1,621 identified themselves as binge-viewers.

Cities with the highest percentage of binge-viewers included Dallas, San Francisco and Washington, D.C. (88% each). More than four in five adults in Philadelphia (84%), New York City (83%), Los Angeles (83%) and Houston (82%) binge-watch. Adults in L.A. are the most frequent binge-watchers, with half of them (51%) bingeing at least once a week.

Comcast through April 6 is making available to Xfinity subscribers streaming access to more than 5,000 TV episodes from premium, cable and broadcast networks.

“Watchathon gives customers a unique, all-you-can-watch opportunity to catch-up on this season’s most talked about programs, and it’s also a great reminder of all the content that’s available on our platform every day,” Matt Strauss, SVP and GM of video services for Comcast Cable, said in a statement.