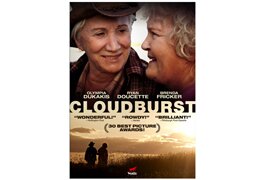 The rugged, foul-mouthed Stella (portrayed by the charismatic Olympia Dukakis) has found her match in the spry, witty Dot (the equally enchanting Brenda Fricker). Having lived together more than three decades, it’s safe to assume they’re in it for the long haul.

Their future, however, is jeopardized when the legally blind Dot takes a fall and her meddling granddaughter, Molly (Kristin Booth), decides to put her in a nursing home, without consulting with Stella. In one of the more memorable scenes, Stella stages a plan to bust Dot out of the home and head to Canada so they can become legally married, thereby thwarting Molly’s efforts to keep the couple apart.

Shortly into their road trip, the elderly lesbians pick up a young hitchhiker named Prentice (Ryan Doucette), and that’s when things really get fun. Prentice, a sensitive soul, is a modern dancer heading back home. The trio quickly becomes three peas in a pod, creating a priceless blend of comedic fodder.

Whether it’s giving an impromptu best-man speech at a crowded Nova Scotia tavern on behalf of newlyweds Stella and Dot, or being there for Stella when faced with a difficult situation, it’s evident that Prentice gained lifelong friends, and vice versa. And to think, it all just began with a ride in a red pick-up truck.

Cloudburst is an amusing, heartwarming tale of love, friendship and life’s little adventures. The interviews included in the bonus material provide greater insight into just how funny Dukakis and Fricker can be when given license to run wild. A behind-the-scenes look at filming the pub scene also is enjoyable.