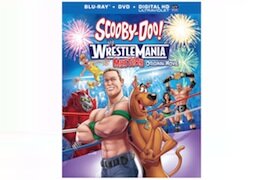 One of the hallmarks of classic “Scooby-Doo!” was the way the show would bring in famous guest stars in animation form, such as Batman or the Harlem Globetrotters, to help the Mystery Inc. crew on their adventures.

In this regard, pairing Scooby and the gang with the Superstars of World Wrestling Entertainment isn’t such a far-fetched concept. The real mystery here is why it took so long to do it.

A pairing between the WWE and Scooby-Doo! In the 1980s might have made a lot more sense, given how most of the WWE characters at the time were basically cartoonish archetypes anyway. Some even had their own animated series (anyone remember “Hulk Hogan's Rock 'n' Wrestling”?) while characters such as Sgt. Slaughter were literally turned into “G.I. Joe” action figures. Fans of Sgt. Slaughter’s “G.I. Joe” days will be happy to see him return in animated form here, though it’s disappointing he doesn’t get to speak.

Anyway, the crossover does make a fair amount of sense today given the transformation of WWE into a huge media empire, and the cross-promotional opportunities are obvious, even if they come across as cheesy.

The story involves Scooby and Shaggy winning a trip to “WWE City,” a fictionalized wrestling mecca where the Superstars train and the fans can take a vacation to meet them. The team arrives just as the upcoming Wrestlemania is being threatened by attacks by a mysterious ghost bear, so naturally they get involved, especially after the WWE Championship belt is stolen.

Several WWE Superstars lend their voices to the project, playing themselves, such as John Cena, Brodus Clay, Kane, AJ Lee, Santino Marella, The Miz, Triple H, announcer Michael Cole and the big boss himself, Vince McMahon. Luchador Sin Cara also features heavily into the story, but the masked man doesn’t speak. The animation does a fair job capturing everyone’s likenesses, and even throws in a few surprise cameos.

Cena, being one of the WWE’s top personalities at the moment, gets a majority of the screen time, signing on as an ad hoc sidekick to Mystery Inc. (and causing Daphne to instantly fall in love with him when he takes off his shirt to reveal his chiseled abs).

As could be expected, some plot trickery gets Scooby and Shaggy involved in a match against Kane at Wrestlemania.

For Scooby-Doo! fans, the proceedings are par for the course, though they might find the constant WWE references to be a bit obtrusive. Wrestling fans will be drawn to it simply out of sheer curiosity, even if they’re likely to find it all a bit silly.

The Blu-ray includes a featurette about the making of the movie, focused mostly on the WWE Superstars who participated because of their fondness for Scooby-Doo. There’s also a bonus wrestling-themed episode of “A Pup Named Scooby-Doo.”