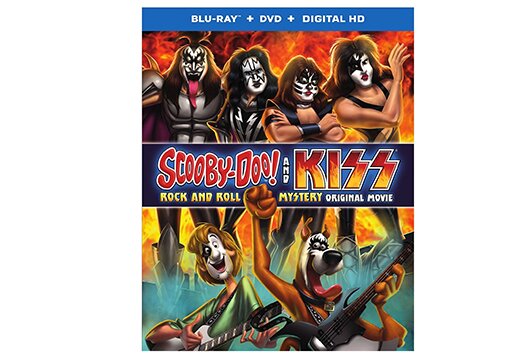 The idea that a team-up of Scooby-Doo and KISS can exist in our reality is mind-boggling. However wild you might imagine such  a story, ramp it up to 11. Scooby-Doo! and KISS: Rock and Roll Mystery is an adventure not to be missed.

This is really an amazing movie if you think about it. The only question is, who is going to get more out of it, the kids these movies are usually aimed at, or their parents?

The fun begins at a KISS-branded amusement park called KISS World, where the guests are being haunted by a mysterious Crimson Witch who is searching for a giant black diamond. The Mystery Inc. gang just happen to be wandering by in hopes of checking out a KISS concert, and get roped into the mystery along with KISS, who, it turns out, are also mystery solvers.

So, they team up, mostly because Starchild thinks he can sneak off with Daphne for some alone time in the Mystery Machine.

After some hallucinogens get thrown around, KISS reveals themselves as superheroes from another dimension, which they have to protect from the Witch.

Quite frankly, kids might be enthralled by the bright colors and superhero sensibilities of the story, but really one would have had to have grown up before the 1990s to really appreciate what is going on here. It plays like an extended music video for an entire KISS album that just happens to guest star Scooby-Doo. (Whether the presence of an adult beverage may heighten the viewing experience is left to any age-appropriate viewers to discover).

What's especially great is how much the film borders on self-parody and revels in all the absurdity it knows it's throwing at the audience. This is probably the closest an animated "Scooby" movie will get to presenting Scooby and Shaggy as the whacked out stoners everyone stereotypes them as (at one point, Gene Simmons even rdismisses Shaggy as a "hippie").

Even the guest talent on display is impressive, with voice cameos from the likes of Kevin Smith, Jason Mewes, Penny Marshall, Garry Marshall and Darius Rucker.

The Blu-ray includes a couple bonus "Scooby" cartoons, a KISS blooper reel and an amusing featurette in which the cast members say if they are a Shaggy or a Scooby (the byplay between Smith and Mewes debating the point is hilarious).

But the real treat is the movie itself. Destined to be a cult classic, it offers more than enough fun for any viewer, whether or not they're fans of KISS or Scooby.

KISS Joins Scooby-Doo for a 'Rock and Roll Mystery'