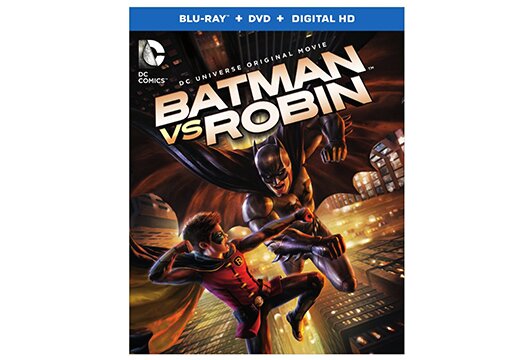 Last year’s Son of Batman marked the introduction of Damian Wayne into the DC Universe animated movie canon, as Batman’s long-lost son who was trained by assassins and eventually becomes the new Robin.

Batman vs. Robin, a direct sequel to Son of Batman, provides a satisfying character examination of Damian (Stuart Allan) as he struggles to find his own identity amid the expectations of his lineage, while Bruce Wayne is shown to have no idea how to be a father to the boy.

The film merges two recent storylines from the comic books — the “NoBody” arc, in which a long-lost adversary of Batman tempts Damian to join him on a darker path; and the popular “Court of Owls” storyline that involves Batman discovering a secret cabal of Gotham City’s elite has been guiding the city’s destiny for centuries.

The Court’s primary agent is a masked assassin named Talon (Jeremy Sisto), who in Batman vs. Robin hopes to recruit Robin to one day take up the mantle of Talon while at the same time giving the Court leverage against Batman (Jason O’Mara).

That leaves Damian torn between the opposing ideologies of two potential mentors: the “justice not vengeance” philosophy of Batman, or the no-limits approach of Talon. As Talon’s methods seem more in line with Damian’s natural instincts, he bristles against Batman’s attempts to reign him in, resulting in the conflicts that lends the movie its title.

Couple Damian’s struggle with flashbacks for both Batman and Talon revealing their own troubled past, and we are left with a film that is very much about the relationship between fathers and sons.

Filled with rousing action sequences and some intriguing character drama, Batman vs. Robin is a definite improvement over Son of Batman, which should delight comic fans who were disappointed by the first movie.

There’s even a voice cameo from Weird Al Yankovic as the villainous Dollmaker, a bad guy who has been given a lot more exposure lately thanks to the “Gotham” TV series.

With much of the film’s marketing focused on the Talon storyline, the Blu-ray extras accordingly focus primarily on the Court of Owls in two in-depth featurettes. The first one runs about a half-hour and delves into the comic book history of the Court and what makes it such a fascinating adversary for Batman. The other is about 15 minutes long and looks at the idea behind the Talon character. Also interesting is a full-length commentary track with the filmmakers, who offer additional story insights.

In addition, the disc contains a 10-minute preview of the next DC Universe animated movie, Justice League: Gods and Monsters, due later this year. It’s what’s known as an “Elseworlds” story, an alternate-universe reimagining of Superman, Batman and Wonder Woman.

As is standard for a DC Universe animated movie release, the Blu-ray includes four bonus cartoons from previous DC-based shows; here, the selections involve examples of times when Robin came into conflict against Batman, though there is also a Superman cartoon that involves a villain who is a minor character in the movie.

There’s also a fun cartoon from 1943 in which Bugs Bunny spoofs Superman and pays homage to the troops fighting in World War II.