A Salute to the Original Digital Driver: Warren Lieberfarb 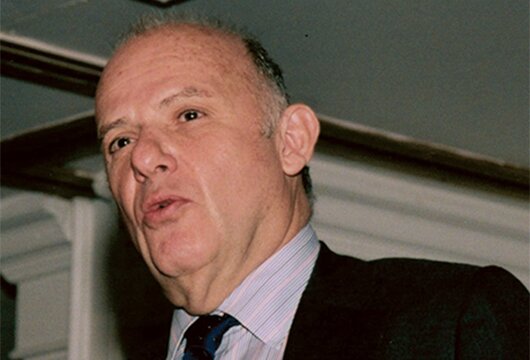 At 73, Warren Lieberfarb is the proud father of a very famous young adult: DVD, the most successful consumer electronics product in history, which turns 20 this year. And if he seems remarkably calm and content — he’s even taking a twice-a-week history class — it’s because unlike most parents who have weathered a turbulent adolescence, his legacy is not mired in uncertainty and what ifs. It is both assured and crystal-clear.

With DVD, Lieberfarb didn't just make Hollywood a heck of a lot of money. The argument can be made that he also set into motion the sweeping digital revolution that has forever transformed the way we consume entertainment. Streaming, downloading, mobility, even Netflix — none of it, one could maintain, would have been possible without the foresight, vision and resolve of Warren N. Lieberfarb, the original Digital Driver.

That’s why we are singling out Warren Lieberfarb for a special salute in our annual Digital Drivers issue. DVD opened the door to digital as a home entertainment delivery mechanism, and the industry has never looked back. DVD and its successor, Blu-ray Disc, also have served as an entry point for the lucrative electronic sellthrough (EST) business, with the studios shrewdly including digital copies with physical discs in an effort to acquaint mainstream consumers with the concept of pure digital transmission.

Capturing the essence of Warren Lieberfarb — and just how right he’s been about this business, all along — in a space as short as this isn’t easy. So let me go back 10 years, to our April 2007 issue, when I related a few personal anecdotes: “I first met Warren Lieberfarb in mid-1995, when  DVD  was  still  a  glimmer  in everyone’s eye, two rival formats were planning to come to market, and studios were slugging it out over who had the highest prebook numbers for rental cassettes. As editor in chief of Video Store Magazine, I had written a column in which I advocated rental pricing for the new disc format.  Rental, I wrote, was an ingrained consumer habit that would never go away.

“I received a phone call from a harried publicist at Warner Home Video informing me that Lieberfarb wanted to meet with me, for lunch, in the studio dining room. Since Warren had been notoriously press-shy, I accepted, although I had no idea why I had been summoned.

“So I drove to Burbank on the appointed hour, and met one of the most charming and gracious men I had ever encountered — until about 15 minutes into our lunch, when all of a sudden I felt I was in the middle of a sit-down with Marlon Brando in the first Godfather film. … Warren essentially informed me that I was an idiot, and he proceeded to lay out his vision of DVD as a sellthrough-only product that would add incremental revenue to studio and retail coffers. ‘It’s not a replacement technology,’ he argued.”

Boy, was he ever right. The rental model was dying — stabbed by late fees and return trips to the video store — and Warren was convinced packaged media needed to shift gears into a purchase model if it was to survive. There would always be a large chunk of consumers who didn’t want to buy, he said, but as technology advanced they would be driven to some form of advanced pay-per-view, the only electronic delivery system in existence at the time, particularly if it was easier and cheaper.

Fast forward two years. DVD was on the market, and Warren Lieberfarb was its chief cheerleader. Columbia TriStar Home Video (now Sony Pictures Home Entertainment) president Ben Feingold also emerged as a vocal supporter of DVD, “but with four of the six majors still on the sidelines, it was rough going,” I wrote 10 years ago. “Analysts began revising sales projections downward, and Warren’s tireless championing of DVD was beginning to tick off some people. I remember asking [former] 20th Century Fox studio chief Bill Mechanic when Fox was going to start releasing movies on DVD. ‘Ask Warren Lieberfarb’ was his response.

“Warren became a bit demoralized. ‘I don't know. T.K., maybe I should just give up the whole thing,’ he mused during a private conversation we had during the July 1997 Video Software Dealers Association convention in Las Vegas. (He was walking with a cane at the time, and had followed me into the restroom, which made the whole scene even sadder.) ‘I'm trying to do something that can be very good for our entire industry, but some people just don't seem to get it.’ The trade press got it, however, and so did some of the major retailers. By the late summer of 1997, Universal Studios and Disney had announced their intent to join the DVD team, and Warner went national.

“But just as it appeared DVD was beginning to gain some momentum, another fly appeared in the ointment: Divx, a pay­per-play variant championed by the chief of Circuit City, one of the country's major consumer electronics retailers. Several studios immediately lined up behind it, including Fox, which had yet to come to the DVD table.

“Warren went to war. He criticized Divx as a half-baked blend of packaged media and pay-per-view that was doomed to failure, but still could wreak havoc on the fledgling DVD format by confusing consumers. I agreed with him, and unabashedly railed against Divx in my columns. And when Divx died, chiefly because the consumer electronics manufacturers failed to support it, I rejoiced with him. I also laughed my ass off when I first heard the following story, which I have never been able to verify as fact or urban legend. A reporter asked the head of a leading Japanese consumer electronics manufacturer why his company, and most other companies, would not support Divx, even though it was being championed by one of their leading retail customers. ‘We were told the most powerful man in Hollywood was against it,’ came the response. ‘Who is the most powerful man in Hollywood?’ the reporter asked. ‘Why, Warren Lieberfarb,’ the executive responded. ‘Who told you that?’ the reporter demanded. ‘Mr. Lieberfarb did,’ was the response.”

I’m going to relate one other anecdote that indicates another side of Warren Lieberfarb — a kind, generous man, a mensch, if you will.

It took place at the Consumer Electronics Show in January 1999. DVD by then was a huge hit; I had a breakfast meeting with Warren at Caesar’s and woke up with the flu, complete with high fever. Stymied by CES traffic, I opted to walk the mile and a half from the Monte Carlo. Warren knew right away I was not well, and at the conclusion of our meal, when I told him I had to hurry back because my flight left in an hour, he insisted his car and his driver take me back to my hotel room and then to the airport. “Thanks, but what will you do?” I asked him, knowing he was at the Bellagio, also a good mile away. “I’ll walk,” he said.

The Disc at 20: Packaged Media Resonates in a Digital Age