It's Not Yet Time to Kill the Golden Goose 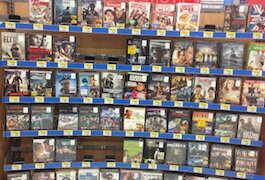 Sometimes I just don’t understand retailers. Disc sales may have dropped significantly since the 2005 peak — slipping from an estimated $16 billion in sales revenue in 2007 to $7.8 billion in 2013 — but that number doesn’t factor in the rampant discounting we saw happening during that same period, which means actual unit sales aren’t nearly off by that much.

And $7.8 billion is still a very healthy number, particularly on the studio end, where you have to factor in that a growing percentage of every dollar that’s lost from the sale of physical discs is made up for on the digital end.

Sure, from a retailer end, a drop of more than 50% is a scary concept. But instead of looking at the glass as being half full, many retailers are reacting as though not only is the glass half empty, but it’s also draining, fast.

Visit any of the big chain stores and you’ll see that DVD and its successor, Blu-ray Disc, aren’t getting anywhere near the respect they once did.
Best Buy stores are a prime example. Movies used to be front and center, commanding huge, neatly organized aisles. Now, the DVD and Blu-ray Disc sections are tucked away in a corner in the back of the store, maybe one-third the size they once were. At the Best Buy in Oceanside that’s one of my regular stops, the disc section is almost always in a state of disarray, with half-empty shelves and tattered merchandisers standing around like bored people in an elevator.

At the nearby Walmart, it was 2 p.m. on a Tuesday and a pallet of unopened disc boxes was still sitting around at the front of the electronics department, almost completely blocking access to the meager new-release endcap at the front of one of just two rows the store now uses for its DVDs and Blu-ray Disc.

It appears that retailers are fast giving up on packaged media, and if they keep treating DVDs and Blu-ray Discs as the proverbial red-headed stepchildren (no offense, Chris Tribbey — this is an old Southern expression!) then their fears that discs will soon become obsolete will become a self-fulfilling prophecy.

I understand retailers have to go with what’s hot; everything else is an afterthought. That’s why so many big retail chains where the disc was king are now focusing on tablets and smartphones, as well as accessories. Follow the money, as the saying goes — and that’s precisely what they’re doing.

And yet if you look back, DVD achieved its phenomenal success in the first place because these same retailers took a gamble and put the disc front and center — long before there was any money to follow — and largely through their efforts at wooing consumers with their bright, catchy displays and prominent positioning, the format took off in a far more successful fashion than anyone had expected.

In hard numbers, the golden goose may have lost some of its luster, but it’s still golden. Retailers should rethink their strategies and breathe a little life back into their disc sections. They just might be pleasantly surprised at the results.